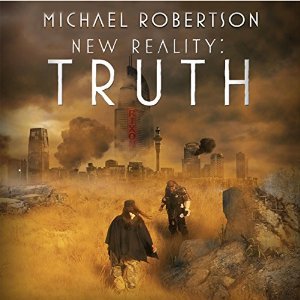 A new “gaming” experience has swept the world created by Rixon, the world’s biggest company.  This new game allows you to experience anything that you can dream of, literally.  You plug in and all of your cares or fears wash away.  Everyone has plugged into it except Jake and Tom.  These two are wandering the destroyed lands after the world was left to rot when everyone plugged in.  Follow these unlikely travel partners as they try to find Tom’s son in this new wasteland.  Along the way, they face off against an unknown enemy who is trying to kill them at what seems like every step.

The narration for this was done by Matt Armstrong.  Matt does a great job voicing these ageless characters.  We really don’t know how old Jake is, and we only really know that Tom is older than Jake.  Armstrong does a fantastic job with the voice and setting the stage for how the entire book feels like these two are seconds away from dying.  His voice portrays the struggle well.  The quality was good and I didn’t notice any production issues.

After I finished this book last night, I knew that the review was going to be hard to write.  Not because the book was bad, far from it.  The book was interesting and unique in many ways.  But, because there is no way to write about how I really feel because it is a HUGE  spoiler.  I can say this, the book did NOT end the way that I expected.  I was really expecting a totally different angle to be taken towards the end.  With that being said, I think the ending is what a lot of others were expecting.  It wasn’t anti-climactic my any means, I think that some readers would feel like it was a cop-out.

I couldn’t help but draw a ton of similarities from Wall-E.  Minus the cute robots, the characters were similar in both disconnection and girth.  Even the way the city was supposed to be left made me think of this movie.  I don’t think this takes away from the book a ton, but the similarities are definitely there.

The two characters were lovable and hate-able which made this book so interesting to read.  Jake is so optimistic and really tries to take their grim and crappy situation with a smile if he can.  Tom was almost his voice of reason while being a pessimist. It was almost like a big brother, little brother type of friendship.

By the end of this story, all I could think was “what’s going to happen?”  And I’m here to tell you, even though this is supposed to be part of a series–the book has a proper ending (yay!).

Overall, this book was a weird combination of dystopian, sci-fi, and post-apocalyptic.  It peaked my interest and kept it, and gave me a surprise ending, which isn’t always easy to do.

This audiobook was provided by the author, narrator, or publisher at no cost in exchange for an unbiased review courtesy of Audiobook Blast.

When New Reality, a fully immersive, five-dimensional entertainment experience, was introduced to the world, everyone logged on.

Everyone except Jake and Tom.

It doesn’t take long for the world to crumble into ruin, leaving Jake and Tom wandering through leveled cities occupied by New Reality dreamers. In order to find one gamer among many, they must risk everything – going up against Rixon, the corporation behind New Reality.

Facing starvation, the New Reality headsets offer sustenance from a synthesized sludge pumped directly into the gamer’s body. With a headset, they’ll get fed and their only limitations are their own imaginations. They can have paradise, comfort, and peace. They have the power to realize their deepest desires.

Wrestling with the decision, they soon find out they aren’t the only ones living in the ruins. Someone…something else has taken an interest in the pair.

Turning from scavengers to prey, they have to make a decision. Family or self? Faith or fear? Truth or New Reality?

Michael Robertson is a writer of dark post-apocalyptic fiction, horror, and science fiction. He’s been writing for over fifteen years and has been published in several anthologies and magazines, as well as being published by HarperCollins.

As a father of two young children, he writes when he can, which is mostly before they get up and after they’ve gone to bed.

He loves reading, writing, watching movies and spending time with his family.