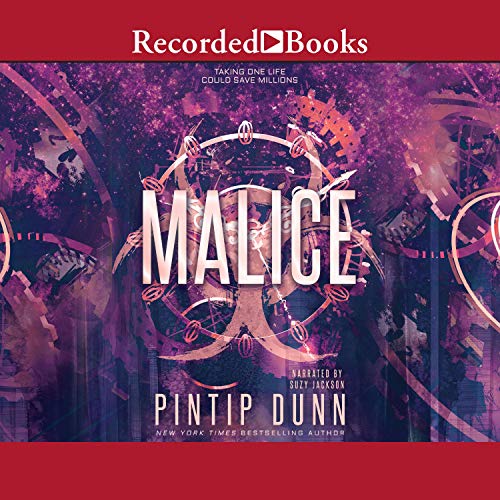 The cover is what originally drew me to this book – then the sort of informational, but also leaves a ton of questions synopsis that really sealed the deal. I’ve never read anything from Pintip Dunn before this book and if she continues the series (it does say it’s “Malice Book 1”) or writes other books similar to it I’ll definitely pick them up.

Malice had a surprise around every corner. I didn’t realize going into it that it was going to be a YA time-travel novel. I say this but it’s actually a bit of a spoiler. I can’t really talk around it because if I do the vagueness would make writing this review impossible. At first I was worried this was going to be too YA for me, but it ended up changing course pretty much right after I thought that and not only didn’t feel too “young” but grabbed my attention and wouldn’t let it go.

I kept guessing what the ending was going to be and what I thought was going on. I got a few of my guesses right but a few of them were way off. So, the book felt predictable but it ended up being unpredictable (at least to me) and I really enjoyed that.

Overall, this was a great book. I thoroughly enjoyed it and absolutely flew through it. Pintip Dunn did a great job making believable characters that you felt for. Ones that when things weren’t going well, you feel that bad feeling. And when things would improve, you’d smile knowing they were getting better. The near end (basically the ending) had me in happy tears. Combine this with the great narration from Suzy Jackson and this is a great book that I think a lot of different genre readers would enjoy.

What I know: a boy in my school will one day wipe out two-thirds of the population with a virus.

In a race against the clock, I not only have to figure out his identity, but I’ll have to outwit a voice from the future telling me to kill him. Because I’m starting to realize no one is telling the truth. But how can I play chess with someone who already knows the outcome of my every move? Someone so filled with malice they’ve lost all hope in humanity? Well, I’ll just have to find a way – because now they’ve drawn a target on the only boy I’ve ever loved….