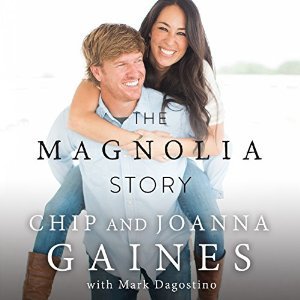 This story will make your heart happy

I absolutely LOVE Fixer Upper.  The amount of “real” that is on that show compared to other shows on any network makes me smile. The way that Chip and Joanna are to each other and to other people just put a big smile on my face every time I watch them.  So, when I saw that they had a book coming out I was hoping that it would be narrated by them.  It is!

The stories that are in here basically take from when they first met until the present, sprinkling in some amazing stories that you won’t find anywhere other than this book.  If you love them on Fixer Upper, then I promise you will enjoy this book.

The amount of times that The Magnolia Story has made me laugh and cry was too many to count.  It really was just a cute and enjoyable audiobook.

Both Chip and Joanna narrate the book, but it seems to be mostly Joanna with Chip just chiming in from time to time (unless the story is from his perspective).  And his little additions made me laugh almost every time.

It’s just so nice to have a story that can make your heart happy at the end of the day.  Especially with all of the bad going on in the world. The Magnolia Story was my little reprise from all of the negativity around us.  The same way that Fixer Upper is for me, too.

Are you ready to see your fixer-upper?

These famous words are now synonymous with the dynamic husband-and-wife team Chip and Joanna Gaines, stars of HGTV’s Fixer Upper. As this question fills the airwaves with anticipation, their legions of fans continue to multiply and ask a different series of questions, like: Who are these people? What’s the secret to their success? And is Chip actually that funny in real life?

By renovating homes in Waco, Texas, and changing lives in such a winsome and engaging way, Chip and Joanna have become more than just the stars of Fixer Upper; they have become America’s new best friends. The Magnolia Story is the first book from Chip and Joanna, offering their fans a detailed look at their life together, from the very first renovation project they ever tackled together to the project that nearly cost them everything; from the childhood memories that shaped them to the twists and turns that led them to the life they share on the farm today.

They both attended Baylor University in Waco. However, their paths did not cross until Chip checked his car in to the local Firestone tire shop, where Joanna worked behind the counter. Even back then Chip was a serial entrepreneur who, among other things, ran a lawn care company, sold fireworks, and flipped houses. Soon they were married and living in their first fixer-upper. Four children and countless renovations later, Joanna garnered the attention of a television producer who noticed her work on a blog one day.

In The Magnolia Story, fans will finally get to join the Gaineses behind the scenes and discover:

And yet there is still one lingering question for fans of the show: Is Chip really that funny?

“Oh yeah,” says Joanna. “He was and still is my first fixer-upper.”