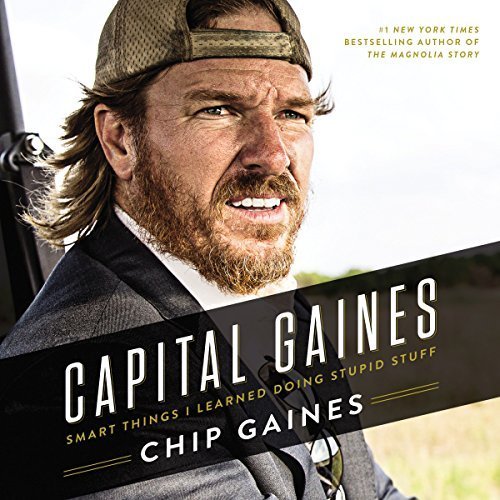 Chip’s “Tell All” is Full of Practical Advice

As said in my title — Capital Gaines is touted (by Chip) as his tell-all book (jokingly of course).  But it is full of practical advice told in Chips jovial point of view.

I already read Chip and Joanna’s book The Magnolia Story (I believe it was last year) and really enjoyed it.  They are one of my favorite couples on television and it’s their ability to seem real and genuine in a medium with so much fakeness attached to it.

Capital Gaines goes through some of Chip’s backstory and tells some of the reasons that these stories helped shape and mold him into the person that he is today. From trying to learn Spanish to better communicate with his workers to having to come home having not learned Spanish because his businesses weren’t ready for him to let go — this book is full of funny and entertaining stories that all have a point.

I truly believe that Chip wants to make the world a better place and I hope that he is able to accomplish it.  I particularly liked the part where he told the reader to “write an obituary about yourself”.  He gives two versions of who he could become. One where he loses everything (and it’s his fault) and another where he is able to do almost all the things he wanted because he worked for them.  It was a neat exercise (that I’m sure is in other “self-help-type” books but from Chip, it just felt different.

Overall, Capital Gaines felt a little preachy at times but without that it wouldn’t have felt like Chip was writing and reading it. If you’re on the fence about buying the real book or the audiobook — I would get the audiobook.  Listening to Chip telling these stories really helped make the book in my eyes.  Sure, I could have read it in his voice but it’s different to hear him smiling on the other end when he tells a funny story.

The most important step is taking the first one.

The funny and talented Chip Gaines is well known to millions of people as a TV star, renovation expert, bestselling author, husband to Joanna, and father of 4 in Waco, Texas. But long before the world took notice, Chip was a serial entrepreneur who was always ready for the next challenge, even if it didn’t quite work out as planned. Whether it was buying a neighborhood laundromat or talking a bank into a loan for some equipment to start a lawn-mowing service, Chip always knew that the most important thing was to take that first step.

In Capital Gaines, we walk alongside him as he relives some of his craziest antics and the lessons learned along the way. His mentors taught him to never give up and his family showed him what it meant to always have a positive attitude despite your circumstances. Throw in a natural daredevil personality and a willingness to do (or eat!) just about anything, and you have the life and daily activity of Chip Gaines.

Capital Gaines is the perfect book for anyone looking to succeed not only in business but more importantly in life. 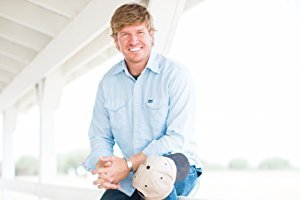 Chip Gaines and his wife, Joanna Gaines, are co-founders and co-owners of Magnolia Homes, Magnolia Market and Magnolia Realty in Waco, Texas. Together, they also host HGTV’s Fixer Upper, where Chip handles construction and Joanna serves as the lead designer.

Chip was born in Albuquerque, New Mexico and was raised in Dallas, Texas. He graduated from Baylor University’s Hankamer School of Business with a degree in marketing. Chip is an entrepreneur by nature, and started and sold many small businesses before Magnolia. Having grown up spending time on his granddad’s ranch in North Texas, Chip became a true cowboy at heart. He was made for hard labor and always preferred digging ditches to academic pursuits.

Chip specializes in making the impossible possible for Joanna’s designs, and his design preference is “whatever Joanna likes.” To say he adds comic relief to the team would be an understatement.

Recently Chip and Joanna partnered to write their autobiography: The Magnolia Story. The Magnolia Story details their life together; from how they met and their first home renovation projects, to how they came to have their own TV show and much more.

Chip loves life with his four kiddos and is head over heels for Joanna. Hand in hand is exactly how Chip prefers to work, which makes Fixer Upper even more fun to watch, and he enjoys seeing his and Joanna’s passions merge to complement and serve one another.