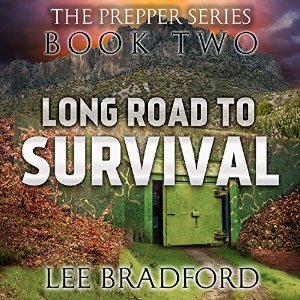 The road stops here… for now.

The dichotomy of Buck and Paul was alive and well in the second book in this series. The family is safe, at least for now. They have made it to a bunker an are quickly ushered inside and forced to give up everything they have. Throughout the story Buck and Paul have it out — Paul thinking that Buck was a conspiracy theory “kook” and Buck thinking that Paul was a liberal follower. They will find common ground as things begin to show their true colors.

The narration for Long Road To Survival was done by Johnny Heller, and you can tell why he has over 300 books to his name. Heller has one of those voices that can lend itself to almost anyone. He voices Buck perfectly, giving him the manly ex-military type voice that the listener is expecting. He gives each character a new and unique voice allowing for a great flow throughout the whole story. I probably have 50+ books on my wishlist that are all Hellers — and if you listen to any of his audiobooks, you’ll understand why.

This book was really enjoyable. My only complaint is that it has THE EXACT SAME NAME as the other book in the series. So I read two books named “Long Road To Survival” and there is really no way to tell them apart until you realize that they are book 1 and book 2 (and that’s not easily figured out either).

The differences between Buck and Paul also make the tension of the book tighter than a guitar string, but they start to learn things about each other and begin to see each other in a new light.

Overall, the book was enjoyable. A different type of tale in the crowded post-apocalyptic genre. Bradford and Weber did it again and kept me glued to my seat for the entirety of this novel.

America continues to teeter on the brink of collapse after terrorists detonate black-market nukes from container ships.

With deadly clouds of radiation swooping in from the wasteland of American port cities, Paul Edwards, and his father-in-law, Buck, seek shelter in a spectacular government bunker, the likes of which has never been seen.

They’ve succeeded in finding safety from the dangers outside, but in a world without rules, trust can be a deadly thing.