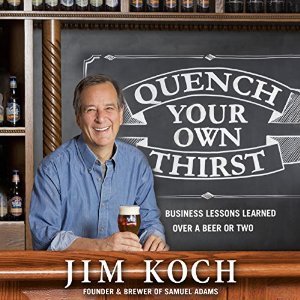 Part Business Advice and Part Beer Stories, Quench Your Own Thirst Has it All

Starting a new business is hard.  Starting a new brewery in Boston when everyone drinks Budweiser and Miller is almost impossible.  Jim Koch, a third generation brewmaster did what many thought was impossible and fought his way from the bottom of the barrel to the “top” of the craft beer empire.

Koch narrates the story himself. I love when a story as personal as this one is narrated by the author.  Jim is able to give insight and inflection into the words and stories that no one else could.  From the chuckle around a good story to the sadness around the loss of a friend and partner.  Koch’s narration was really well done. (Even though he thinks he has an awful voice).

Many of you probably don’t know that I run a craft beer blog (beergodblog.com) and have been reviewing craft beer for over 3 years. But, I absolutely love the stuff and find a lot of the stories behind the starting of different breweries to be fascinating.  Boston Beer aka Samuel Adams is no different.

The book was a mixture of business advice, entrepreneural advice, and great beer stories.  I was in it for the beer stories and I wasn’t let down.  Koch’s storytelling ability is amazing, and the book was a blast to read.  There were a few things that I knew as a craft beer drinker and a lot that I didn’t.  Overall, I really enjoyed Quench Your Own Thirst and I’m glad that I read it.

Do yourself a favor, grab the audiobook, crack open a Boston Lager, and enjoy!

Founder of The Boston Beer Company, brewer of Samuel Adams Boston Lager, and a key catalyst of the American craft beer revolution, Jim Koch offers his unique perspective when it comes to business, beer, and turning your passion into a successful company or career.

In 1984, it looked like an unwinnable David and Goliath struggle: one guy against the mammoth American beer industry. When others scoffed at Jim Koch’s plan to leave his consulting job and start a brewery that would challenge American palates, he chose a 19th-century family recipe and launched Samuel Adams. Now one of America’s leading craft breweries, Samuel Adams has redefined the way Americans think about beer and helped spur a craft beer revolution.

In Quench Your Own Thirst, Koch offers unprecedented insights into the whirlwind ride from scrappy start-up to thriving public company. His innovative business model and refreshingly frank stories offer counterintuitive lessons that you can apply to business and to life.

Koch covers everything from finding your own Yoda to his theory on how a piece of string can teach you the most important lesson you’ll ever learn about business. He also has surprising advice on sales, marketing, hiring, and company culture. Koch’s anecdotes, quirky musings, and bits of wisdom go far beyond brewing.

A fun, engaging guide for building a career or launching a successful business based on your passions, Quench Your Own Thirst is the key to the ultimate dream: being successful while doing what you love. 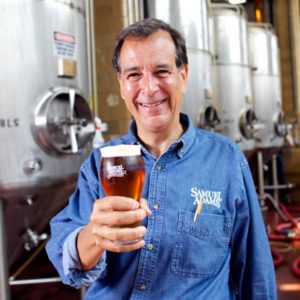 Jim Koch is the founder of The Boston Beer Company and brewer of Samuel Adams. He founded the company in 1984 using his great-great grandfather’s recipe and set to the task of revolutionizing American beer. Samuel Adams Boston Lager has been an important catalyst in the American Craft Beer Revolution for more than thirty years, bringing full-flavored, award-winning beer to the American beer landscape. The Boston Beer Company has become one of the leading American craft breweries and now accounts for just over one percent of the U.S. beer market.