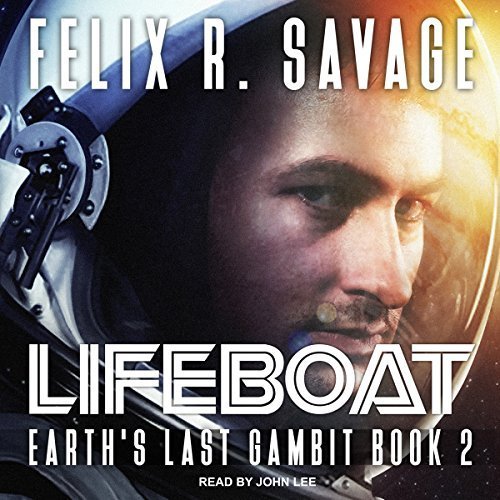 Better Than The First… By A Little

Lifeboat is one of those rare cases that I like the second book more than the first.  I wasn’t a huge fan of the first book and this book does suffer from some of the same issues that I had, but it did get better.

The intro of this story basically revolves around slowly losing his mind.  It was a crazy journey and I was worried that it was going to drag on a little bit like the first one.  It did for a little while, but the pace picked up and made this book much easier to read. The main character grew on me a bit too, I didn’t think that he would – but I liked him a lot more in Lifeboat.

Some of the issues that I had with this book were that it just seemed to drag on a little bit longer than it needed it.  Sure it’s supposed to be this epic space tale but you can summarize and shorten some of the sequences to make the book a little easier to read/finish.

I can tell that Savage learned from writing the first book and added them to Lifeboat because it did grow – both in pacing and in storytelling.  I look forward to seeing what other tales that he writes after Lifeboat (in series or not).

After two years aboard the Spirit of Destiny, tensions among the elite international crew are at breaking point. Despite the obvious need to stay professional and united, as they approach the mysterious alien spaceship orbiting Europa, pilot Jack Kildare is acutely aware that not all the members of the crew may wish the best for the mission. There may be a saboteur on board, and he knows of at least one spy: the astrophysicist Skyler Taft.

An attack from long-range alien weaponry cripples the Spirit of Destiny, forcing Jack to disobey orders to save the ship. Now he has to face the fact that the broken crew is the least of his worries. With the risky maneuver that saved the ship putting him dead center of the commander's crosshairs, and the crew attempting to hold together the tattered remnants of their unity to investigate the alien spaceship, Jack finds himself selected for the most dangerous mission of all: descending to Europa's surface to find out what lurks under the ice.

As the voyage of discovery unravels into a desperate battle for survival, Jack races the clock to decode the secrets behind the alien intrusion. Will he find the truth in time to save the crew?

Also by this author: Freefall
Also in this series: Freefall

One thought on “Audiobook: Lifeboat by Felix R. Savage (Narrated by John Lee)”