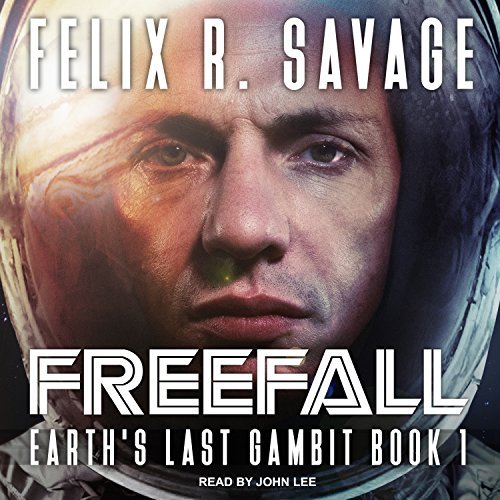 I have a really hard time getting into a book when it’s choppy and rough to start. Unfortunately, that’s how Freefall started. It took me numerous times to actually listen to this to get into it. I loved everything it was about but it just felt like it needed a new edit in the intro to make it really catchy.

Sometimes a story feels like it’s missing characters or character interaction — this was not one of those stories. There were almost too many characters and listening in audio made this a slight problem. Lee did a nice job of trying to voice people differently but with this many characters, it was a near impossible thing to accomplish.

Another issue that I had was that it felt like some characters were really well developed while others were left in the dark. Not even for a “good” reason but just because Savage didn’t spend the time developing them.

The story itself was an interesting one. I’ve read a lot of Sci-Fi in my day and this one is about average in both story and execution. The story itself had some really great parts at times. But other parts felt weak or not thought out.

Overall, Freefall was a slightly above average Hard Sci-Fi story that had some good parts and some not-so-much.

Despite NASA budget cuts threatening to put a sharp end to his career as an astronaut, British-born space shuttle pilot Jack Kildare knows without a doubt that his life will never be the same. Photographs snapped from the International Space Station reveal an alien spaceship in orbit around Europa, opening a terrifying new chapter in human history, and Jack finds himself in the center of a gigantic international effort to respond to the alien threat.

But when he is dismissed from NASA over a trumped-up security gaffe, Jack and his close friend Oliver Meeks combine their skills in an attempt to generate an innovative new development: a spaceship drive based on their observations of the alien craft's technology. With the unknown threat driving international competition and the entire planet's spaceflight resources thrown into the fray, the focus of attention turns toward one single goal - a ship capable of traveling to Jupiter to confront the alien menace, the Spirit of Destiny. Amid unknown entities pushing to destroy the project from the inside out, and enemies baying for blood, Jack finds himself submerged in a world of secrets, sabotage attempts, and cold-blooded murder.

Can Jack decode the secrets surrounding the arrival of the alien spaceship in our solar system? Or will his dreams of the ultimate space adventure be taken into the ashes with the Spirit of Destiny?

Felix has a long history associated with rebellion. He was born in the 1970s, a decade of American youth rebelling against the safe culture of their parents. He is married to a wonderful woman and they have two beautiful daughters. Together the four of them live in Tokyo serving their cat overlord and benevolent protector. Felix pounds the keyboard while not translating, delighting in his family, or catering to the whims of the family’s cat. He woke up one day to learn that he was a New York Times and USA Today bestselling author, but he continues to keep a low profile, and never stops watching out for any sign the lizard people have found him.