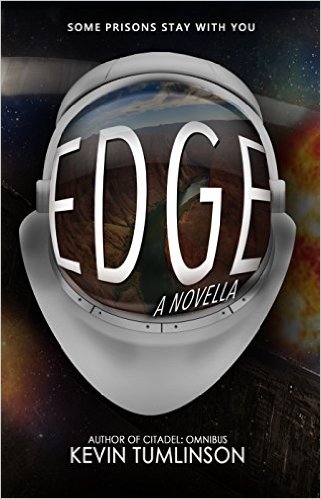 Prison can mean many things to many people.

Prisoner 61789, better known to the reader as Charles Martins is imprisoned, but not in the typical sense that you and I understand.  His prison is a suit that he wears.  He cannot feel anything on the outside.  But, as a trade off it monitors him and keeps him alive.  Follow Charles as he tries to figure out what is out there, egged on by a friend who brings up an age-old story about “the edge.”

I had just finished the second installment of Tumlinson & Thacker’s episodic technothriller The Lucid, and before I moved — I fired this up on my Kindle and finished it in one quick sprint.  Hovering around 40 pages this falls right between a short story and a novella for me.  Novellas are usually closer to 100 pages (but I think it’s actually a word count that determines this).  Either way, short story or novella, this is a hard hitter.

Part science fiction, part technothriller, I found myself trying to figure out the ending throughout.  I had a few guesses along the way but as the description suggests… I wasn’t able to correct guess it.

The author at the end mentions that writing short fiction is hard, I totally understand because you are not given the typical space to build a character or story arc.  But if you can write a good short story/novella it is a piece of art.  This is one of those pieces of art.  Tumlinson successfully builds a character and makes you feel for them once it is over.  The story arc is there as well.  Just a brilliant piece of short fiction.

"If you think you know plots, I dare you to figure this one out before the conclusion."

Charles Martins, prisoner number 61789, is serving time in a body suit—a prison cell that he wears 24/7. One part prison cell, one part life support system, it takes care of every biological need, provides video for re-education, and even gives him psycho therapy from an AI psychiatrist. What it doesn't do is allow him to touch or feel anything. And while it monitors his every action, it prevents him from doing anything that feels real.

When Charles learns about the Edge—the edge of the world, maybe, or maybe the edge of some virtual reality—he volunteers for the most dangerous community service the penal colony offers. He risks life and any chance of future freedom to enter the Red Zone, where his job is to remove an ocean of zone sludge and earn time off of his sentence.

Charles wants to escape, but he may not like what he finds on the other side of the edge.

Also by this author: The Coelho Medallion 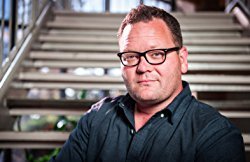 Kevin Tumlinson is a thriller and speculative fiction author traveling the U.S. with his wife, an RV, a chihuahua named Mini, and a fully-loaded laptop. He writes multi-million-dollar blockbusters that can be read for only a few bucks.

Kevin grew up in Wild Peach Texas—an actual village wedged between the Brazos and San Bernard Rivers, with a population of less than 2,500 people and seemingly not a peach tree within a hundred miles of the place. He has had an eclectic career that includes engineering, teaching, broadcasting and media, and marketing. He has also been the recipient of numerous awards for writing, public speaking, and his work in advertising and marketing.

At the moment, Kevin—along with his wife and his dog—are traveling full-time in an RV, exploring the US as Kevin writes and promotes his books. The inside joke is that they are going on the worlds most far-ranging house hunt. They’re only half joking.

Learn more about Kevin and his work on his website, and get three of his best books for FREE when you copy and paste this URL and register at http://kevintumlinson.com/starterlibrary