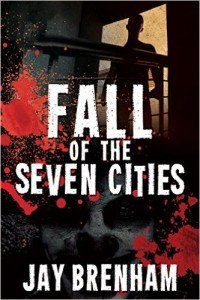 A shockingly quick read that has me chomping at the bits for more.

The story starts you out meeting Matt, a real estate agent who is severely down on his luck.  He find himself walking near a hospital as a scene of chaos enfolds in front of him.  As he enters the hospital to figure out what was going on — people start attacking other people to Matt’s disbelief. The story follows Matt and his unlikely “crew” as they try and figure out what is going on around them and find a way out alive.

This was a blazing fast read (as most novellas are) and man does Brenham leave you wanting more.  I’m glad that there is another story in this series because I definitely want to find out what is going on (and hopefully find out what started it all).  Matt is definitely one of those characters you could take or leave at the beginning — you feel sorry for him but you’re not sure why.  He is quickly morphed into a very likable guy who you find yourself rooting for in the end.

A great addition to the zombie/horror genre with a fast paced story and great characters.  Keep a look out for more Brenham novels in the future.

Matt Hess has failed at almost everything: his real estate career is in shambles, his engagement is over and he’s in debt up to his eyeballs. But his past problems pale in comparison to what he’s about to face—an infection so deadly it takes out a hospital waiting room before his very eyes.

Along with a patrol cop, a maternity ward nurse, and a newborn infant, Matt manages to escape the first wave of infected. But the disease spreads so rapidly that soon the entire city of Virginia Beach is overwhelmed. Now Matt and his companions must figure out who they can trust and fight their way out before they join the ranks of the infected horde.

I have lived up and down both coasts of the United States and some places in between. I spent half a year living in a former Soviet satellite and I’ve traveled to more countries than I can count on two hands. Some of those travels were for work and others were for pleasure, but I enjoyed them all. I now reside in an undisclosed location in the Pacific Northwest. I wasn’t born here but I got here as fast as I could!

When I’m not writing I like to forage for clams, mussels, oysters and all kinds of bivalves. When I can’t do that, I love crabbing, camping, hiking, and reading about building my own log cabin.