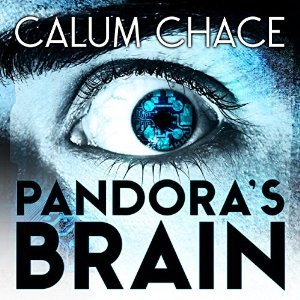 A thrilling tale of the near-future, AI’s and all.

This book follows Matt, a brilliant and incredibly likable student near London who has just found out that his father was killed in a car accident.  He has also found out that his father was involved in some incredible steps towards making Artificial Intelligence a reality through his work in neurobiology and brain scanning.  Upon finding this out, Matt decides to study the same things.  Little does he know just what is waiting for him once he begins this journey.  Follow Matt and his friends and family on a ride that you won’t believe is unfolding in front of you.

I listened to this on audiobook, which was given to me by the narrator in exchange for an honest.  The narration was solid and enjoyable.  Even through some of the hard science, his narration was easy to follow.  He did what I would call a combination of narration and dramatization.  There were parts where a dramatization was used (different voices) but it wasn’t done for each new character that was included.  There is nothing wrong with this, just needed to point it out.  The audio quality was great and I had no issues with studio noise or anything of the sorts.

I’ve been reading a lot of AI fiction lately, and it is fascination (see my reviews for numerous Nick Thacker including “I, Sargeant” and “The Gray Picture of Dorian”.  Or my review of “Networked” and her novella “Too Good For This World” by LK Chapman.

This genre is one that I will quickly be adding to my “must read” genres because I’m always sucked in and spit out by the authors wanting more and more.  This book was no different Calum Chace brilliantly explained a lot of the science behind the AI within his novel and it is incredibly believable (even if the science is impossible at this point). Chace and the narration by Joe Hempel had me on the edge of my seat and staying up WAY too late to find out what was going to become of Matt.

If you are a fan of Science Fiction, AI, or just a gripping Technothriller – this book is for you.  And do yourself (and your eyes) a favor and grab the audiobook, you won’t be disappointed.

I received a free copy of this book.

Pandora’s Brain is a techno-thriller by best-selling writer Calum Chace. It uses the issues raised by the coming machine intelligence explosion as a platform for a fast-paced and thought-provoking adventure story.

Set in the very near future, it features Matt, a shy but engaging and resourceful student who discovers that his recently-deceased father was involved in research that could enable the construction of the world’s first conscious machine.

Matt’s enquiries lead to him being kidnapped, as he is caught in the crossfire between two groups pursuing that goal – one led by an internet billionaire, and another backed by the US military. Matt has to do more than simply survive: he has to harness these powerful forces to his own ends. At stake is his own life and those of his family and friends.

A dramatic seaborne rescue operation, a series of brutal murders and other filmic action scenes follow. In the course of his adventures, Matt discovers that the potential upside of creating machine intelligence includes immortality, and godlike powers of understanding and being – but the potential downside is immediate extinction, or worse. As he is drawn deeper into his adventure, he becomes both the symbol and the victim of a global struggle over the approach to be taken towards this powerful new technology. A landmark decision at a meeting of the UN General Assembly forces Matt to make a fateful decision which sparks the story’s final twist. 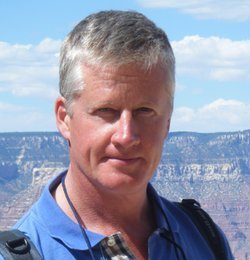 Calum Chace studied philosophy at Oxford University, where he discovered that the science fiction he had been reading since boyhood is actually philosophy in fancy dress.

He is co-author of The Internet Startup Bible, a business best-seller published by Random House in 2000. He is a regular speaker on artificial intelligence and related technologies and runs a blog on the subject at www.pandoras-brain.com.

Prior to writing Pandora’s Brain, Calum had a 30-year career in business, in which he was a marketer, a strategy consultant, and a CEO. He maintains his interest in business by running a small property business and serving as chairman and coach for growing companies.

He lives in London and Sussex with his partner, a director of a design school, and their daughter.