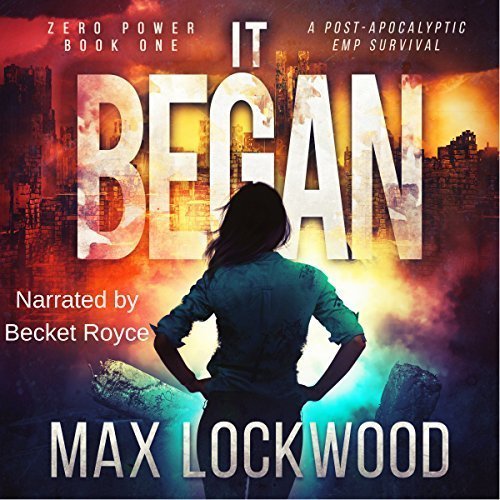 No Power = Restart Button On Your Life

The thing that I really liked about It Began was the simplicity of it.  Lockwood didn’t try and overdo it and go really deep into anything.  It was, what I would call a “surface level” novel where everything is at or near the surface.  There wasn’t some overarching conspiracy or deep plot going on — Lockwood kept it simple and was able to make a pretty enjoyable book in the process.

The story itself is about a depresses teacher taking care of her family, who is currently the “other woman” in an affair when the lights go out indefinitely.  Honestly, at first, I wasn’t sure how I was going to feel about her.  In the beginning, she had a very “woe is me” attitude that really rubbed me the wrong way.  I was worried that it was going to continue like that. I’m not a fan of people who are like that in real life and I definitely didn’t want to read a book about someone who was selfish and everything in the world was wrong and it was only affecting her. Thankfully, that was NOT how this story went.  Her character really grew on me after a little while and I noticed that some of her character flaws that annoyed or upset me in the beginning, were starting to become some of the things I enjoyed about her the most.

Her “better half” was an interesting secondary character in It Began.  He was always there when she needed him, but would kind of fade into the shadows when he wasn’t needed.  A sign of someone who really understood Clara.  The other characters in the story were her grandmother (who was sweet and easily tied with her best friend as being the most likable people in the book) and her sister who might be one of the most bizarre characters I’ve ever read.  I won’t spoil anything about her, but be prepared (oh the irony of that statement).

One of my issues with this book was that there was basically zero talk about what happened.  We know that the power is out and we think that it’s because of an EMP but that’s about all we know.  We also understand that older cars and trucks work (since they don’t have any electronics) but that’s it.  I guess if Lockwood was trying to write it only from Clara’s point of view — she wouldn’t really know what was going on until someone told her.

Honestly, going with Becket Royce was a phenomenal idea.  The first novel that I heard with her in it was a dual narration with one of my all-time favorite narrators Kevin Pierce.  Working with Pierce, I was able to hear her slight “attitudey” voice that I thought would work perfectly in post-apocalyptic novels.  This was the first narration of hers that I listened to where it was just her and I thought she did a wonderful job.  Royce has quickly become one of my favorite female narrators working in the PA space today.

The EMP strike was just the beginning of it all…

Clara Thomas was a 9th grade English teacher, living a simple life at home with her sister and grandmother. She always had plans to settle down some day and become a writer. Sometimes, plans are just dreams left unfulfilled.

They thought that the widespread outage was just within their vicinity. They were wrong.

Without any electricity and power, Clara needs to help her family survive. The people in society have become restless, and will do anything for food. With the fall of power, law and order have become nonexistent, letting people get away with crimes.

Will Clara be able to be strong for her family and those around her to get them through this crisis? Will she be able to get herself through it?

Also by this author: Red Devils: The Front 2, Point of Transmission (Morgan Strain #1), Point of Proximity, Point of Destruction