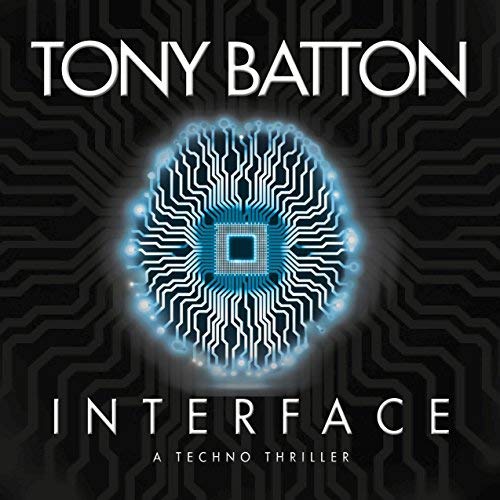 CERUS is the company to work for, and Tom Faraday has just been headhunted to work for them.  His career couldn’t get any better.  But after Faraday attends the opening ceremony for the new CERUS Tower he cannot remember much. He wakes up 2 days later and is almost late for work.  And that’s just the beginning of his problems.

The narration for Interface was done by Daniel Philpott who I’ve never listened to before.  Philpott does a really great job turning a technical book into one that is easy to read and listen to.  When you can do that with a detailed book like Interface, I think that you will have a long and enjoyable career narrating Technothrillers and Hard Science Fiction novels.

If Tony Batton hasn’t worked in high-tech fields I would be amazed.  The amount of accuracy within the pages and minutes of Interface were just amazing.  I know that there was (and will be) some speculative parts, but that’s what makes it fiction.  The scariest kind of fiction is that which feels like it’s either already true or could become true at any moment.

Batton takes one of those scary “what if” scenarios and turns it into a “woah” kind of story.  The characters within were really well thought out and played their parts perfectly.  Their strengths and weaknesses were on full display and Batton made full use of each character.

The feel of the book was what got me.  I honestly felt like I couldn’t put it down. The pages and minutes just absolutely flew by.  Sure, the narration helped this a bit, but the story-telling is just great.  I honestly hope that Batton continues to write within this genre (or one similar to it).  I feel like he could be the next Crichton or Douglas E Richards.

I just have one thing to say.  Tony Batton is a force to be reckoned out for in the Technothriller genre.  Seriously, be on the lookout for more from him.

When Tom Faraday joined internationally renowned CERUS Biotech, he thought he'd landed his dream job. A chance to work with their famous CEO, William Bern, perhaps to change the world.

But Tom has found himself in an organization in crisis. The company bet the house on a radical neural interface project, only to be blocked by a government with reasons of its own. Now CERUS is running on vapor and the corporate vultures are gathering. Bern isn't one to go down without a fight. He's turned things around before, and he has a plan to do it again.

The problem is, 25 years ago CERUS made a similar mistake. And if history is repeating itself, Tom might be the only one who can stop it.