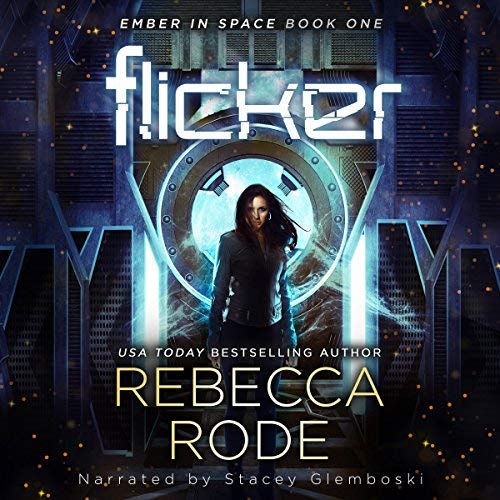 Decide Who You Will Be

With the ability to read people’s past, present, and future by looking into their “inner light”, Ember is kidnapped and thrown into a government training facility for the Empire. The Empire and the Union have been locked in a war for years. Hoping to gain an advantage, Flicker’s are used as weapons, interrogators, and other stations to help win the war. With her father sick back on Earth, Ember must find a way to get back to him in order to keep him alive but no one leaves the school. She soon finds out that her gift is far more dangerous than she ever believed and now she must find her true self and what she wants to become.

From the very beginning, I was hooked. Everything happens so fast that it doesn’t really give time to be boring. There is so much to learn about this world but it is very easy to follow. This new world isn’t complex, mostly because there is this war going on and it’s easy to imagine what Flickers are. I really enjoyed the descriptions that Road provided for the story. It was easy to imagine how each scene happened. This was definitely an interesting concept and I wanted to know more about it.

Ember was definitely an interesting character. I really liked her spunk and how she really tried to keep to her Roma ways. The most important thing to her is her father and she tries everything to get back to him. This was the only thing I wish wasn’t so dragged out. I loved that Ember tried absolutely everything to get back to Earth but it took so much of the beginning of the book that I think could have been used on something else. It did help develop Ember’s character and really made you want her to succeed even more. Stefan was an interesting character as well. His background was given pretty early but I still enjoyed learning everything from him. Even though his and Ember’s relationship was very obvious, I still liked it. It never felt forced upon and did feel natural. I wish there was more of a development between her and Mare though.

Overall, this story was good! I really enjoyed the whole set up of the world and the characters. This held my interest right from the beginning and I definitely wanted to know more. As Ember discovered more of what was really happening, it made me want her to succeed even more. I am excited to continue this series, especially after that ending! I highly recommend this story for anyone who is looking for a fast-paced, easy sci-fi story.

Stacey Glemboski did a fantastic job narrating this story. I am SO glad she did a slight accent for Ember. It gave her more of an authentic Roma feel to her character without making the accent so heavy it was hard to follow. Each scene was delivered great and really made the words come alive. I would definitely recommend this audio!

Getting sold to the empire was never part of the plan.

Ember lives two very different lives. By day, she's a mysterious Roma future-teller, and by night, she struggles to care for her sick father. All she wants is the power to control her own life - no arranged marriage, no more poverty. Her future-reading talent is what will get her there. But when the Empire discovers her gift, Ember's life changes forever.

Ember soon finds her innocent talent is far more dangerous than she believed. The Empire wants to turn her into a deadly weapon. But Ember has plans of her own, and they don't include living under the Empire's control.

Because even the best weapons can backfire.