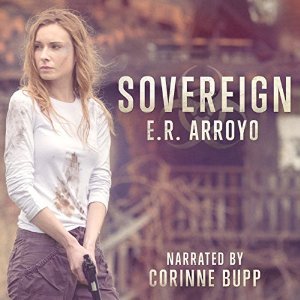 Escape is her only option…

Cori has lived inside the walls of Antius for the majority of her formidable years.  Her father was killed by “savages” when she was only 10 and the survivors inside Antius picked her up and saved her.  She wants back out because she wants to know if there is more.  The system within and it’s new brutal leader want to keep her imprisoned here forever, but she has other plans.

The narration for this was done by Corinne Bupp.  What a perfect narration.  Seriously, Corrine absolutely killed it.  Her and Cori (ironically with the same name) were one in the same.  She had a perfect performance as Cori.  Throughout the entire book, I thought she did a wonderful job voicing the other characters too — so that you could understand who was who.

So, I want to start my review portion of this by saying E.R. Arroyo — if you are reading this PLEASE make the 2nd book into an audiobook and PLEASE sign Corinne Bupp again.  I know that I can read the second book, but I would love to hear it performed by such a wonderful voice actor.

Also, this is the first book I’ve read in quite some time that I think should be a movie.  After I was about 25% through the story I almost considered looking up to see if the film right has been sold somewhere.  It was written that well, and combined a lot of my favorite parts of my favorite books and movies.  It was part Hunger Games and part Divergent.  It also felt part The Island (movie by Michael Bay) and part another book/movie I can’t remember when writing this.  It really had my senses tingling throughout and I can’t say that about a lot of other books.

The main character Cori was wonderful.  Arroyo does such a wonderful job penning Cori that I really feel like I know her.  When she would feel hopeless, I felt hopeless.  When she felt rage, I too felt rage.  Arroyo captured the essence of her so masterfully.

The story had the perfect arc.  I’m always worried when I see that there is a series of books planned because sometimes authors can leave a lot of questions unanswered under the rouse of “to be continued” logic.  When I was listening to this I knew it was part of a series, but I did not know if the series was still planned, finished or anything. But, Arroyo didn’t leave many questions unanswered.  I could walk away from the story now and feel happy with where it was left off. I don’t want to, I want to finish it as soon as possible — but now I’m going to eagerly await the second book being released on audiobook and pray that it is!

Overall, if you enjoy dystopian stories like The Hunger Games and Divergent — you will definitely enjoy this.    It’s part post-apocalyptic and part dystopian.  Something bad happened, and now they are trying to survive and thrive.  The even cooler part is that it’s not about zombies, which is a nice change of pace for me also.

Arroyo is a masterful storyteller, and I am currently adding more of her stories to my queue.

I was given a copy of this audiobook in exchange for my honest and unbiased review.

Chemical warfare has obliterated most of the world, including America, and the survivors have turned into feral beasts, save one colony, Antius, the last remnant of civilization. Seventeen-year-old Cori (aka Citizen 1206) only longs for wide open spaces and freedom. But Antius has no use for such things, just mindless drones to serve in a place with walls, fences, and laws. A lot of laws, which Cori constantly breaks. So she’s spent years plotting her escape, which is the only thing that will save her from the colony’s deranged leader, Nathan. She isn’t looking to be a hero, and she certainly isn’t looking to fall in love, but she just might do both.

Sovereign is Book One in the Antius Ascending Series. 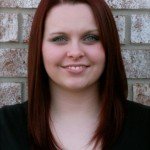 E.R. Arroyo is the author of YA dystopian series, Antius Ascending, and co-founder/owner of Band of Dystopian Authors and Fans, a Facebook community, blog, and company that champions dystopian, apocalyptic, and post-apocalyptic fiction. E.R. is passionate about books, music, and her family, and she loves to talk shop with other authors and with her readers.