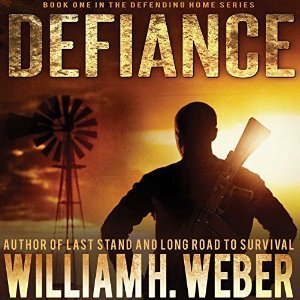 Defiance is a story about defending the homefront. Making sure that what’s yours stays yours and no one can take it from you as long as you are still alive. Unfortunately, a new local government is in charge and they are as corrupt as they come.

Kevin Pierce provides the narration for Defiance and, as always does a perfect job.  As I’ve said time and time again in my reviews of his, he has the perfect “prepper” voice that allows these post-apocalyptic/prepper tales to perfectly fly off of his tongue.

William H. Weber tells a different story.  There isn’t much back-story here and there honestly isn’t much need for it.  All the reader understands is that Dale Hardy is a stubborn survivor and he wants to continue that way.  He was a pretty one-dimensional character and I believe that he was written that way.  Honestly, there is nothing wrong with it because Weber wrote the other characters around him to be much more multi-dimensional and able to help Hardy in any way possible.

The story was a little different than some of the post-apocalyptic/prepper books I’ve read in that it wasn’t really about the disease.  There was barely any mention of it at all (except for it killing some people close to the main characters, and that if you survive what happens to your eyes).  The story was about Dale and his homestead. And for a story about that, it was pretty darn enjoyable.

The action was there, and it was perfectly pirouetted with stories about what else was going on (both the side that was against him and the others around him).

Overall, Defiance was an enjoyable story, but when the story just started getting good — it came to a quick and sudden halt.  I understand wanting to write a series, but this really had a full stop before it was “finished”.

A month has passed since a deadly virus swept the country, killing millions and leaving chaos in its wake. Dale Hardy has managed to weather the storm by hunkering down on his homestead in Arizona. He grows his own crops, generates his own power, and draws fresh water from his own deep aquifer. But when a nearby town’s water supply dwindles in the searing Arizona heat, Dale’s peaceful existence is threatened.

The new mayor and sheriff want what he has, and they’re willing to do whatever it takes to get it. With a crooked local government conspiring against him, Dale will need to stand in defiance or risk losing everything.

William H. Weber is the author of the Last Stand series, including the novels Surviving America’s Collapse, Patriots, and Warlords, as well as the Prepper series.