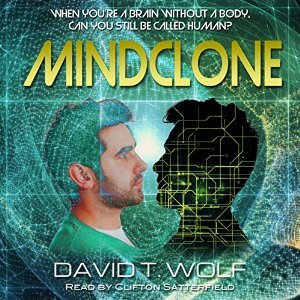 Marc awakens to realize that he cannot feel anything, or move, or even speak.  He begins to freak out.  He feels different and he’s not sure why.  Later on we find out that this is not Marc, but a “mindclone” of Marc’s entire memory up until the brain scan.  The story follows Marc and Adam as they figure out what being “human” actually entails.

The narration, done by Clifton Satterfield was the first I’ve ever listened to any audiobooks narrated by him.  His narration style is really nice.  Slow enough for a first time read, and clear enough if you choose to speed it up you can with no issues.  Satterfield is clear and concise and I would have no qualms listening to another audiobook narrated by him.

The story felt done before, but really only because I’ve read some really excellent AI fiction before.  If I hadn’t I probably would have loved this.  Don’t get me wrong, I still liked it a lot.  The main character Marc can be annoying at times, and so can his AI counterpart Adam.  I think this was done on purpose, just to never let the reader get settled with what was going on.  Also, I didn’t like the lack of explanation of just why they let “Adam” do as many things as they did.  Maybe they didn’t know it would achieve what it could in the first minutes of “life,” but man maybe start with an Oracle AI.  Definitely do not let it use the Internet unwatched.

But, without giving much away, I think that is exactly what the author was going for in this book.  What would happen if a newly created AI were to just be released without any watch, oversight, or anything like that?  Crazy stuff for sure, this book does not let up from start to finish.

My only other issue was sometimes I had a hard time figuring out if Marc or Adam was talking, I know this is hard to do, and I think this may have just been an issue with the audiobook – the characters are switching during conversation so quickly that I wasn’t exactly sure if I was listening to one or the other.

Overall, a wonderful story from David T. Wolfe about AI and what could happen in a world where a clone of someone’s mind were to run free.

This review was originally posted on Audiobook Reviewer, and I was given a free copy in exchange for my honest and unbiased review.