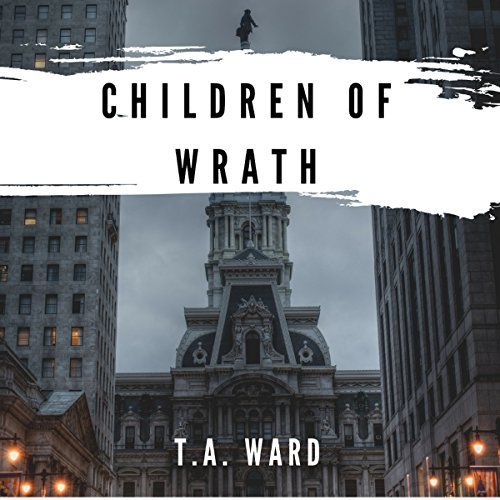 Children of Wrath Makes You Feel

There was no “waiting for the story to pick up” with Children of Wrath. T.A. Ward had me hooked from the very first moments of the story when we meet Dr. Ethan King on “the Day of Destruction.” Her use of imagery was masterful and diverse, encompassing a vast array of visual, auditory, olfactory, and tactile imagery–it was as if I could see, hear, smell, and feel what Ethan was experiencing from the very first page. When coupled with the third person point of view, making readers privy to Ethan’s inner monologues, I felt as if I was standing right there in the midst of the drama. It was as if I were right next to Ethan as he listened to news coverage of the bombing on the Capital, when he watched as the dirty bombs, filled with a toxic nerve gas, were dropped on his own city of Philadelphia, and as he and his co-workers scrambled to decontaminate and treat survivors of these horrific attacks.

Five years later, Ethan and his wife are struggling to come to terms with their new reality. We learn that this new reality includes Inexorables, the children born to women who were exposed to the toxic nerve gas, children who are “ruthlessly violent, irrepressibly psychopathic—and incurable. They kill without thought or remorse, and inflict torment on their victims with childish glee.” Despite these dangerous, horrific qualities, Ethan recognizes that Inexorables are still children, human children, and faces a moral dilemma when he encounters an abandoned young Inexorable, freezing and in grave condition after exposure to the elements. He quickly decides to take the child home with him, a decision that changes everything for him, and for his wife Liz, a resilient, loyal woman who desperately wanted a child of her own.

As Children’ of Wrath progressed, I found myself fully engrossed and completely invested in the characters. Ward’s description of the Inexorables left me feeling torn–one moment I was cringing at the description of their violent outbursts, wondering how Ethan could subject himself (or Liz) to such risk, and the next, I was learning how the government was “dealing with” Inexorables at “Assistance Centers,” and fighting tears for the horror and indecency of it all.

This book will make you feel things, all kinds of things. I felt uneasy, wondering how much Ethan should trust his co-workers, the government, the media, the employees at the Center, even his longtime friends. I frequently wondered how I would react to events in the book. I found myself questioning what it means to be human, what it means to be humane, what kinds of moral obligations we have to other living beings if it is ethical or moral to cause harm or pain to some in order to protect the masses.

I pondered my own strength and considered how I might cope if exposed to a nerve gas that dashed my dreams of one day being a mother, of raising a healthy, happy child. What would I do if I thought I had the opportunity to fulfill that dream, only to learn that my baby was destructive, relentless, and sadistic, hell-bent on hurting everyone around them?  What I would do if faced with Ethan’s situation. I wanted desperately for Ethan and his wife to enjoy a happy, stable relationship and have the opportunity to raise a family in peace. I wanted Ethan to find the answers to what was really going on with Inexorables.

I wanted him to find a cure. In short, I wanted everyone to live “happily ever after.” I can’t tell you if I got any of what I wanted because the answer to that question would involve too many spoilers. I do encourage you to check out Children of Wrath for yourself and feel all the feels.

Tom Askin’s voice felt like a perfect fit for Ethan and I thought he did a sufficient job voicing the female characters as well. His voice was generally soft but expressive, booming on occasion to add drama and his tone was easy to listen too. However, there was something a bit off with his cadence. Askin would pause or speak in a halting manner, in a way that at first seemed intentional, as if an attempt to bring to life the fleeting, halting thought patterns Ethan might be experiencing during traumatic moments…but it continued for the duration of the novel. I found it a bit disruptive and annoying at times, so much so that I took a star off of the “performance” portion of my audible review for what was otherwise a solid performance.

Five years after working triage during America's terrible Day of Destruction, Dr. Ethan King wants nothing more for himself and his wife than a normal life. In the aftermath, however, life is anything but normal. The mysterious nerve gas unleashed during the nationwide terrorist attack has left its disturbing mark among the millions of victims, namely brain abnormalities in unborn children.

These children, dubbed "Inexorables," live up to their name: They are ruthlessly violent, irrepressibly psychopathic, and incurable. They kill without thought or remorse, and inflict torment on their victims with childish glee.

In his pursuit of a normal, peaceful life, Ethan tries as best he can to put these grim realities to the back of his mind. But one cold night, when he comes face to face with an abandoned Inexorable freezing to death in the snow, he must make a choice that could cost him everything and unravel a thread of dark woven secrets. As he races to find a cure for whatever is creating a generation of doomed children, Ethan discovers that doing the right thing in an evil world is never as clear and easy as it seems.