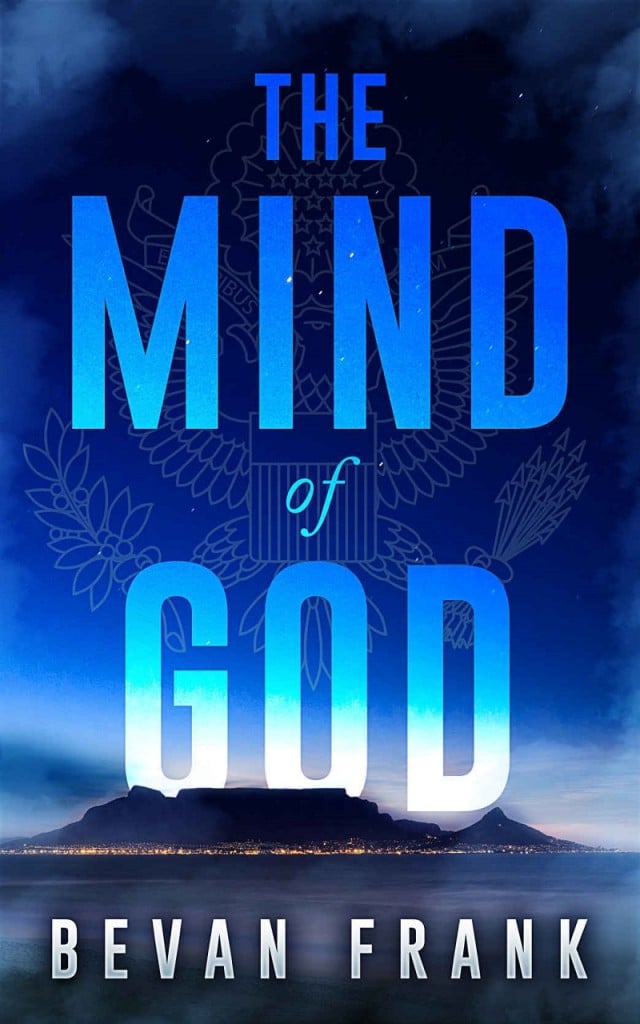 There is a lot going on in this International Thriller

A black box is stolen from the University of Cape Town, also Professor Greene who was working on the project goes missing at the same time.  Coincidence?  Enter The Mind of God to find out more.

I’ll start right off with my issues with the book — it was just a bit slow for me.  Don’t get me wrong, there is A LOT of thriller-action in this, and it is incredibly well written.  My problem is that the scenes seemed to take to long to get to.  And once we were there, they were muddled with mundane details about the characters or the plot.  Sometimes when the action hits, you just have to let it hit.

But, on to the good.  I can definitely see the potential in Frank’s writing.  A lot of this book had me thinking about Ludlum’s books that my dad was always reading.  Ludlum knew how to get you wrapped around his finger — Bevan Frank has the capabilities to do the same.

The Mind of God is a bit of a weird title for me.  I get the meaning behind it but I don’t know if it portrays the terrorism/international thriller vibe that he wanted.  The cover DOES give some of that away.  Also on the cover — wow is it gorgeous.  That blue just pops!

The main characters were all believable, which in a thriller is surprising.  Sometimes, you have one “I can’t believe that happened” (think Jason Bourne, even though he was super well trained, he still does stuff that is shocking).  But the plotline and the thought that went into that is the real star here.  The story, without giving much away was awesome.  The background on the main plotline was incredibly well thought out and I’m intrigued to see what else Frank has in store for his next novels.

The setting was unique too.  I haven’t read too many books that take place in South Africa, and it was a really nice change of pace from the typical DC Thriller.

Bevan Frank definitely could be the next “big name” in International Thrillers.

When Liz Greene discovers that her father is missing, she is unwittingly drawn into a plot that could change the world forever. Before he went missing, Professor Harry Greene had been working on the black box global consciousness project. Now, Liz needs to find both her father, and his groundbreaking research before it’s too late. On the same day, President of the United States Daniel Rafferty is in Cape Town to give an address at the Convention Centre. Is it a coincidence that the black box was stolen while Rafferty is in the same city, or is there an even more sinister terrorist plot at play? Follow Liz, as she and her friend, Tim Fletcher, decode one clue after another in a deadly hunt around Cape Town, all the while being pursued by an assassin and a CIA agent.

Bevan Frank was born in Cape Town, South Africa. His love of writing and creating characters began in his early childhood where he wrote some short stories for his school library. Bevan has a BA degree in English and Political Studies as well as a postgraduate LLB degree, both from the University of Cape Town. After qualifying as an attorney Bevan opted down the path of writing and editing. He has worked as a business magazine editor, journalist, writer, plain language practitioner and communications consultant. His articles have been published in numerous publications locally and globally. Bevan currently works in corporate communications. He lives in London, England, with his wife and children. The Mind of God is his first novel.

One thought on “Bevan Frank – The Mind of God”