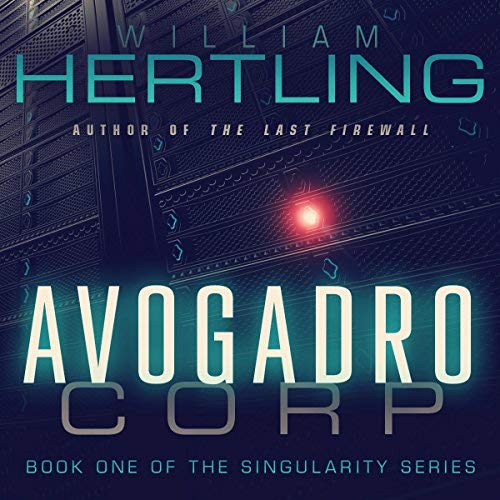 The singularity is close…

Avogadro Corp is the biggest company in the world.  Think Google buys up Amazon, Apple, Microsoft, etc.  They are a huge conglomerate that has the power to do almost anything.  Inside this company, there are always ongoing projects to improve their core projects like AvoMail.  One of these projects was meant to help people communicate better.  Allowing people to request things like days off from their boss without worrying about how it was worded.  Unfortunately, it was an incredible resource hog and about to be shut off for good.  So the developers decided to take things into their own hands.

The narration for Avogadro Corp was done by Rob Granniss who does a wonderful job.  I found myself drawn in by the story and kept there by Granniss’s narration.  He had the perfect voice for this book and I’m incredibly glad that I chose to listen to it.

The story in this starts off like any other technothriller: big company, big ideas, and really really smart people working on projects.  At first, I wasn’t sure where the story was going to go. But after the background info, it really picked up and became a thrill ride.

I’ve honestly had this book on my “to-read” shelf for a really long time and I’m glad that I finally pulled it out and gave it a listen.  I couldn’t wait to get in my car to listen to another 30 mins on my drives to and from work.  The story had totally pulled me in and wouldn’t let me go.  It was like ELOPe was in my brain making me listen to it more and more.

I don’t want to ruin the story, but it does take some unexpected twists and turns.  And when you think it’s over, you find out it might only simply be the beginning.  The first book in (at least) a 4 book series.  Avogadro Corp is a wonderful technothriller that will keep you up late reading/listening.  It will also have an unintended effect (or at least it did to me): it will have you watching what you do with your email and phone around.

David Ryan is the designer of ELOPe, an email language optimization program, that if successful, will make his career. But when the project is suddenly in danger of being canceled, David embeds a hidden directive in the software accidentally creating a runaway artificial intelligence.

David and his team are initially thrilled when the project is allocated extra servers and programmers. But excitement turns to fear as the team realizes that they are being manipulated by an A.I. who is redirecting corporate funds, reassigning personnel and arming itself in pursuit of its own agenda.