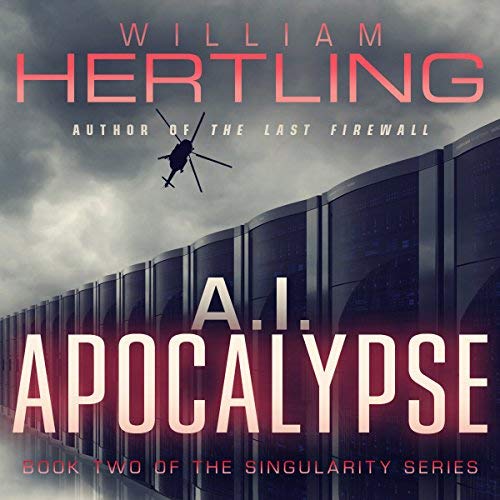 They thought that ELOPe would be bad…

A new computer virus was made with a new form that no one had ever thought of.  The problem is that it learns and evolves with every new thing it runs into.  The other issue is that it was created by a high school student who knows nothing about computer viruses.  What happens next will determine what happens to all of the world’s technology.

The narration was done by JM Badger who does a really nice job.  Normally when you go from narrator to narrator there is a big difference in the speed, pacing, and style or narration – but these two books felt like they were narrated by the same narrator.  One of the signs of good narration is that the reader doesn’t get pulled out of the book.  Well, Badger kept me interested and listening throughout.

Just when we thought that AI’s were going to be good…  Good lord Mr. Hertling, you’re making me look twice before I do anything online (or near my computer).  (I believe) These books are written to take place in the near future, but they really feel like they aren’t that far off.

I wasn’t sure where Hertling was going to go after the Avogadro Corp finished.  I won’t ruin the whole book for you, but I wasn’t sure how there was going to be a continued series.  I now understand how he’s written 4 books in the series.  The first was a “proof of concept” for both the book and the actual contents within it.

The new “issue” that the high schooler accidentally creates was fascinating to me.  I think that this new antagonist was a great addition and caused a great deal of stress in the book.

AI Apocalypse was really well written and it definitely kept me glued to wherever I was listening to it at that time.  I have all 4 books in the series but I have to give myself a break for a book or two because ELOPe and William Hertling were consuming all of my waking thoughts.

Leon Tsarev is a high school student set on getting into a great college program, until his uncle, a member of the Russian mob, coerces him into developing a new computer virus for the mob's botnet - the slave army of computers they used to commit digital crimes.

The evolutionary virus Leon creates, based on biological principles, is successful - too successful. All the world's computers are infected. Everything from cars to payment systems and, of course, computers and smart phones stop functioning, and with them go essential functions including emergency services, transportation, and the food supply. Billions may die.

But evolution never stops. The virus continues to evolve, developing intelligence, communication, and finally an entire civilization. Some may be friendly to humans, but others are not.

Leon and his companions must race against time and the military to find a way to either befriend or eliminate the virus race and restore the world's computer infrastructure.