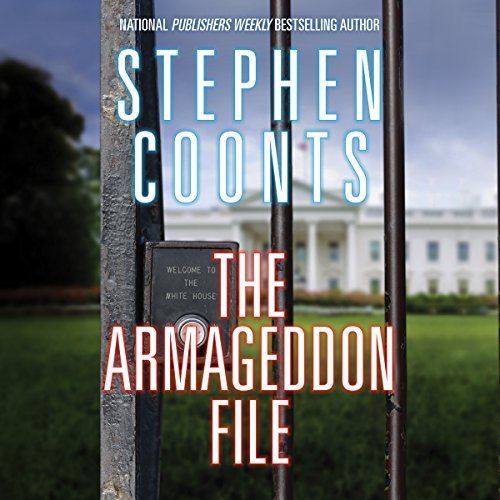 The Armageddon File tells a story of election fraud… but it’s not just about election fraud.  It goes so much deeper.  Deep enough that murder is on the table to cover it up.  So deep that the CIA isn’t even sure who funded it all.

I was really happy with the storyline and the way that this story developed.  I have not read any of the other Carmellini books, but I might look into them after this.  He was a combination of a lot of other thriller and mystery characters but had a couple new things going for him.  His point of view was always my favorite part and when he got an idea in his head he would run with it. I liked that about him.

The character development was good.  Not having read the other books in this series I still felt like I knew Carmellini as a character and that speaks to good writing on the part of Coonts.  I remember seeing the cover of this and being intrigued.  Then I read the synopsis and decided that I needed to read it.  I’m glad that I did.  It was a political thriller mixed with an old-fashioned “whodunit”.

The addition of the actual Armageddon File written by someone who was studying political science and voters history really added a real feel to it. I believe that there are people out there whose sole job is to predict how a certain city or region will vote and that people are paid a lot of money for insights like that.

Overall, The Armageddon File was a political thriller with a twist.  There were almost real-life situations in here (and a lot of allusions to other real things). It was an interesting mix of “did this really happen” and “of course it didn’t happen, (right?).

Rant related to the other rant I had in a recent book incoming.  Skip if you want to leave bullying comments about political affiliations.  You were warned 😉

View Spoiler »I just wrote another review where I talked a little about how the author probably could have written a story and barely changed the person’s name and it would have had the same political feeling without the instant hatred associated with a certain President’s name.  Coonts prooves that I was correct here.  It was obvious that Coonts was writing about specific people (or at least about them as caricatures) and he was able to pull it off without instantly upsetting half of the audience. Sure, if you’re a fan of the sitting president you probably still won’t like this story — but it had so much more going on in it.  « Hide Spoiler

After one of the most contentious and divisive elections in American history, the new president is finally settling into the West Wing. But when his chief of staff discovers evidence that voting machines in key counties in swing states were tampered with, the whole administration is in danger of unraveling. Did someone steal the election? Are America's enemies involved? Were the tampered-with machines actually rigged to swing the election the other way - and if so and the plot failed, what is the conspirators' backup plan?

Jake Grafton and Tommy Carmellini race to solve the mystery of a potentially stolen election before Americans' faith in our democracy, sovereignty, and federal government become completely undone.

Stephen Coonts is the author of 14 New York Times bestsellers, the first of which was the classic flying tale, FLIGHT OF THE INTRUDER.

Born in 1946, Stephen Paul Coonts grew up in Buckhannon, West Virginia, a coal-mining town of 6,000 population on the western slope of the Appalachian mountains. He majored in political science at West Virginia University, graduating in 1968 with an A.B. degree. Upon graduation, he was commissioned an Ensign in the U.S. Navy and began flight training in Pensacola, Florida.

He received his Navy wings in August 1969. After completion of fleet replacement training in the A-6 Intruder aircraft, Mr. Coonts reported to Attack Squadron 196 at NAS Whidbey Island, Washington. He made two combat cruises aboard USS Enterprise during the final years of the Vietnam War as a member of this squadron. After the war, he served as a flight instructor on A-6 aircraft for two years, then did a tour as an assistant catapult and arresting gear officer aboard USS Nimitz. He left active duty in 1977 and moved to Colorado. After short stints as a taxi driver and police officer, he entered the University of Colorado School of Law in the fall of 1977.

Mr. Coonts received his law degree in December 1979, and moved to West Virginia to practice. He returned to Colorado in 1981 as a staff attorney specializing in oil and gas law for a large independent oil company.

His first novel, FLIGHT OF THE INTRUDER, published in September 1986 by the Naval Institute Press, spent 28 weeks on the New York Times bestseller lists in hardcover. A motion picture based on this novel, with the same title, was released nationwide in January 1991.

The success of his first novel allowed Mr. Coonts to devote himself full time to writing; he has been at it ever since. He and his wife, Deborah, enjoy flying and try to do as much of it as possible.
Mr. Coonts’ books have been widely translated and republished in the British Commonwealth, France, Germany, The Netherlands, Finland, Sweden, Denmark, Italy, Spain, Mexico, Brazil, Turkey, Poland, Bulgaria, Hungary, Russia, China, Japan, Czechoslovakia, Serbia, Latvia, and Israel.

Mr. Coonts was a trustee of West Virginia Wesleyan College from 1990-1998. He was inducted into the West Virginia University Academy of Distinguished Alumni in 1992. The U.S. Naval Institute honored him with its Author of the Year Award for the year 1986 for his novel, FLIGHT OF THE INTRUDER. Mr. Coonts and his wife, Deborah, reside in Colorado Springs, Colorado.