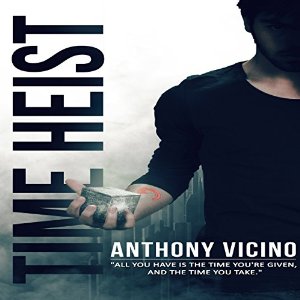 A Futuristic Society and a Gift

Find his wife’s killer. Stop a war. Save the world…Again. Former Time Vice Detective Tom Mandel lost his wife after failing to stop Malcolm Wolfe from pulling off the biggest time heist in Unity history. Nine years later, with less than a day remaining on his government allotted Life Tracker, Tom’s ready to join her.

Adam Verner kills it as always.  He is definitely a great pick when you have a futuristic or technothriller.  He just has this way of becoming characters in such a believable way that it makes the story better.  And, as always Verner’s quality both voice and recording were perfect with no issues at all.

I seriously cannot be the only who draws severe parallels to the intro of the movie In Time (one of my favorites).  The opening scene, the bar, the “fight”, the “clock” on their arm — seriously I had to look it up to see if some of the movie was based on this novel (it’s not from what I could tell).  I found myself having a hard time getting into it because it felt so unoriginal in the intro.

With that being said, after the intro, the book does start to differ itself from where I thought it would go based off of my parallels to In Time.  Vicino can definitely write action, there is no doubt in my mind with that.  Time Heist is definitely a “bang, bang, bang” novel with little-to-no time to breathe in between.  The action is really the driving force, even more so than the actual characters within.

I think without having seen the movie and drawing so many parallels I would have absolutely loved this, but it was really difficult for me to pick up and start.  Once I got through the almost copyright-worthy ripoffs I really did enjoy the story.  Vicino has a wonderfully quick way of writing believable dialogue, action, and plot twists that leave the reader begging for more.

This has been one of the harder books I’ve had to review.  Because I did really like it — it was just difficult for me to differentiate some of the storyline from another story.

Find his wife’s killer. Stop a war. Save the world…Again.

Former Time Vice Detective Tom Mandel lost his wife after failing to stop Malcolm Wolfe from pulling off the biggest time heist in Unity history. Nine years later, with less than a day remaining on his government allotted Life Tracker, Tom’s ready to join her.

But when his former partner, Alaina Raines, brings word that Wolfe has escaped prison and is gearing up for another heist, Tom must decide: Spend his last hours on Earth in a drug induced haze. Or return to the life he left behind to catch the man that broke him.

For Tom, it’s not about justice anymore. Only vengeance.

Now, all he’s got to do is catch Malcolm before the numbers catch him

Are you ready to join Tom on his quest to find his wife’s killer?

Buy Time Heist today to start a thrilling adventure that’ll have you on the edge of your seat until the very last page!

Time Heist is the first book in The Firstborn Saga, featuring fast-paced action, thrilling suspense, and complex characters. If you like Jim Butcher, William Gibson, and Chuck Wendig, then you’ll love this captivating post-apocalyptic adventure. 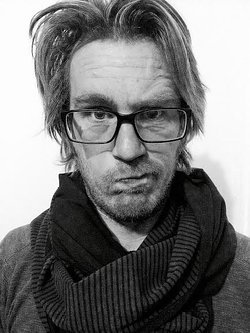 Anthony Vicino is just an author living on the mean streets of Oakland where they believe in grafitti (not wallpaper), crossing streets whenever and wherever they please, and fixed-gear bicycles you’d best keep locked up with an Adamantium chain.

Anthony writes the sorts of fast-paced, thrilling adventures that will drag you (kicking and screaming if need be) into the world of tomorrow and leave you clamoring to turn the pages faster! If that sounds like your cup of kombucha, but you’re feeling thrifty, then pop on over to his word-fortress at anthonyvicino.com/newsletter and get yourself the complete starter library (3 books!) for FREE!

When he isn’t sitting in front of a computer screen contemplating the thousand different ways his character can escape the asylum with nothing but a fork, a shoelace, some chutzpah, and a lot of snark, Anthony is no doubt out climbing a rock in the Sierra Mountains. If not there, you may find him floundering in the ocean pretending to surf.

Anthony has erected a word-fortress in the cyber-slum over at OneLazyRobotBlog.com (and is a regular contributor for the Hugo award winning site, SFSignal.com) where he writes about anything and everything SFF-related. Stop over and see what he’s scribbling on the walls.

One thought on “Audiobook: Time Heist by Anthony Vicino (Narrated by Adam Verner)”