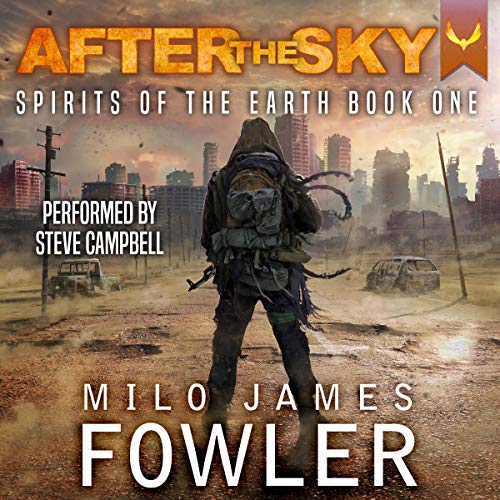 I Fell In Love With This Book

Normally when a book is this long I hesitate before picking it up.  Thankfully, I knew going into this that I already liked the narrator, so when I saw that it was a post-apocalyptic book with a bit of a twist… I was in. I didn’t know what kind of twist and I didn’t know just how in I was going to be, but Milo James Fowler’s After The Sky sucked me in and wouldn’t let me go.

Without diving into the plot, this book seemed to be a mash up of a post-apocalyptic thriller and a fantasy novel.  The Earth is basically decimated almost beyond recognition. People were put into vaults (very Fallout-like) to hopefully come out on the other side. It seems that some of the vaults weren’t what they seemed (also Fallout-like) while others caused people to come out… different.

The story itself was a good one. Winding its way between different characters. Showing their points of view, how they thought and felt. And just going through how life was for them. Things weren’t slow or boring though. Things keep happening so even if the book as a whole was a bit of a slow-burn that doesn’t mean that it wasn’t action-packed. Fowler took his time telling a methodical story about the survivors, the fantasy elements (trying not to spoil it here), and the Earth.

After The Sky was a book that I didn’t know how I was going to feel about in the opening few chapters. But once I got into the meat and potatoes of the story I fell in love with it. Fowlers character building is top notch and this story really took me to another world (even though it’s on a near-future Earth). It’s rare that I find a book that surprises me as much as this one did, but I’m happy when it happens.

I couldn’t finish my review without chatting about Campbell’s narration. He does a great job.  In the beginning each character has their own voice and speech pattern and that doesn’t really affect you, but as the story progresses there are scenes when two male characters are together and you wouldn’t be able to tell them apart without his differentiation (that he set up chapters before). It was a great performance and took a good book and made it great. I’m interesting to see where the story goes and I hope that Campbell is along for the ride.

The meek have not inherited the earth.

The world isn’t how they left it. When the bunker airlocks release them after twenty years in hibernation, the survivors find a silent, barren world outside. But they are not alone. There is a presence here, alive in the dust—spirits of the earth, benevolent and malicious as they interact with the human remnant.

Milton is haunted by a violent past he’s unable to escape, despite the superhuman speed the spirits give him.

Not interested in bearing the next generation, Daiyna is determined to destroy the flesh-eating mutants lurking in the dark, pierced by her night-vision.

Luther is a man of conviction who believes the Creator has offered humankind a second chance, yet he’s uncertain they deserve it—and he’s perplexed by the talons that flex out of his fingers.

Willard is a brilliant engineer-turned-soldier who refuses to leave his bunker, afraid of becoming infected and willing to destroy any obstacle in his way.

As their lives collide, the mysteries of this strange new world start unraveling, culminating in the ultimate life-or-death decision one survivor will make for them all.