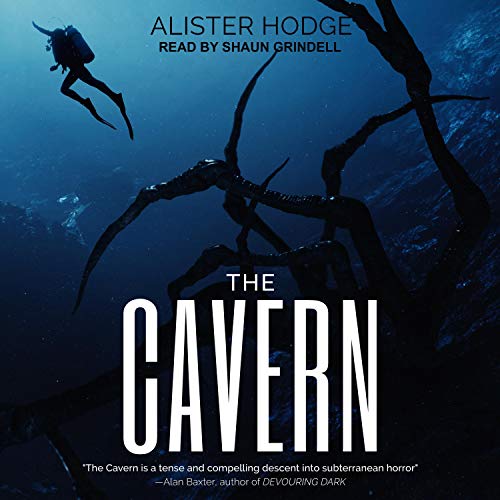 The Cavern was one of those books that within the first 10 minutes of listening to it I had a feeling it was a Severed Press book. I paused, looked it up, and was right. They release some of the beast “creature-feature” out there and this one was no different.

While this follows a lot of the typical creature feature prose, it still was fun and exhilarating. A sinkhole uncovers an undiscovered pristine cave system.  What they don’t know is what hides inside.

The monster itself was pretty original to me. It was able to emulate humans and project different people out so that those unfortunate enough to be near it would think that they were going in to save someone when it was just tricking them to come closer. I thought that was an interesting and fascinating addition to this story and definitely took it up another notch.

What’s hard to do when writing a review about a book like this is that I can’t really talk too much about the creature. If I do it would give away some of the storytelling that Hodge adds. Just know that the cover is pretty accurate but a lot of the fear/horror takes place in much smaller areas (which ramped up the suspense in my eyes).

Overall, a pretty good creature feature that I finished over the weekend. I’m glad that I picked this one up and I hope that Tantor and Severed Press continue to work together on books like these.

When a sink hole opens up near the Australian outback town of Pintalba, it uncovers a pristine cave system. Sam joins an expedition to explore the subterranean passages as paramedic support, hoping to remain unneeded at base camp. But, when one of the cavers is injured, he must overcome paralyzing claustrophobia to dive pitch-black waters and squeeze through the bowels of the earth.

Soon he will find there are fates worse than being buried alive, for in the abandoned mines and caves beneath Pintalba, there are ravenous teeth in the dark.

As a savage predator targets the group with hideous ferocity, Sam and his friends must fight for their lives if they are ever to see the sun again.