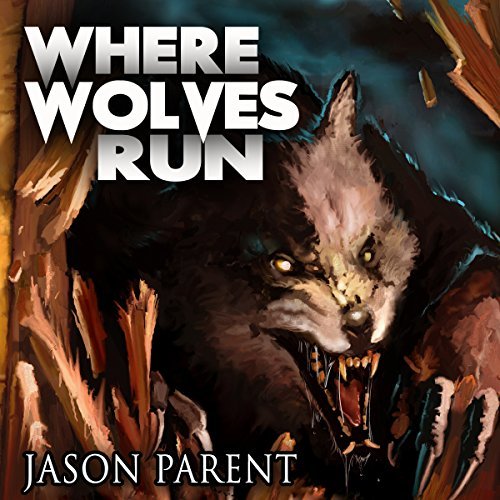 Konrad and his mother live in a hovel in the Bavarian forest. Konrads’ dad left them and Konrad hasn’t seen him in years. One night both his mother and himself hear what can only be wolves all around their little shack. These are no ordinary wolves and by chance, Konrad survives when the wolves attack. His mother is killed though. Konrad has to put his survival down to his father who shows up just in time. His father weaves a tale so fantastical that Konrad has a hard time believing him, but seeing things with his own eyes changes Konrad forever!!
This was such a good read! It’s just under 2 hrs long but felt like much longer. Konrads’ father, known as Father throughout the book, was awesome. I can’t say too much about the plot or anything really because it’s such a short read and I could spoil something, but I will say that even though this is short, it doesn’t suffer and both characters are well written and developed.
The plot moves at a quick pace and it was easy to become invested in. I adored the setting the author chose as it felt like an old time fairy tale type of reading. I do wish we got more books set in such places!!
In all, a wonderfully written, werewolf horror! I want more!!! This is the second book I’ve read by this author and I’m looking forward to more. He has impressed me so far!! I recommend this to everyone 🙂
Jonathan Ip was awesome! He was clear and easy to follow and I thoroughly enjoyed his performance. He had plenty of tones and voices and read this well.

The dense Bavarian forest outside the town of Rattenberg has long been rumored to harbor something sinister, something wild - mythical beasts that vanish into the shadowy woods after each attack, leaving carnage as the only evidence of their existence. Many villagers turn a blind eye to what is happening, but those who believe tremble at the mere whisper of the word: werewolf.

There are those who stand and fight, however. Konrad is one such boy. Too poor to live in the village, he and his mother fend for themselves in their forest hovel alone for months at a time, his father preoccupied with mysterious business abroad.

After a vicious assault on their homestead, Konrad finds himself buried beneath his mother's mutilated body, escaping death only due to his father's chance return. Alive, but taking no comfort in the presence of the man who had left him and his mother to face death on their own, Konrad soon discovers that his father's work has followed him home...and it's hungry.

Also by this author: Seeing Evil, They Feed