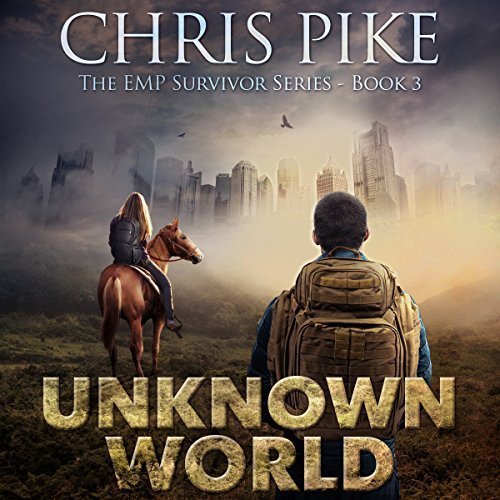 It’s been a fun process to follow Pike’s writing from books one until book three.  It started strong but has really picked up in Unknown World.  Pike knows how to weave a few stories into one without taking away from the overall story arc.

Unknown World’s main storyline is Chandler and Amanda traveling across Texas to get to her aunt’s ranch.  Of course along the way they run into lots of trouble from more than one type of person. I won’t ruin who or what happens, but I will tell you that it involved two different ‘baddies’ that really cranked the action up to 11.

Both Chandler and Amanda are pretty well explained in the first two books, but we are treated to a little more back story on Amanda — which ends up having a pretty big part of the story. I like reading a book and thinking that I know the characters and then an author can throw in a story you didn’t know or didn’t expect and it changes everything.

My favorite part of Unknown World came when we are introduced to Chandlers brother and his ability to always pick the wrong moment.  I found myself laughing at the parts with his brother, especially in the final “bonus” story.

The narration for Unknown World was done by the Post-Apocalyptic master Kevin Pierce, who, surprise surprise, does a great job.  He’s narrated the first two books and I’m glad that he was brought back to narrate the third.

Overall, this book was really enjoyable.  I could tell that book two was leading up to something, but this wasn’t at all what I expected.  It had a lot more action and a lot more human connection than the first 2 books. Which really ‘matured’ the series a bit (don’t worry it’s not heavy like some post-apocalyptic books can be).

I honestly could have left the series here.  I wasn’t sure if this was going to be a three book series or more when I started it, but I would be happy with the way it ended.  With that being said, I know that Pike is writing the fourth right now that’s due out sometime in 2017.

Amanda Hardy and Chris Chandler have finally made a fateful, gut-wrenching decision to leave the Double H Ranch where they had taken sanctuary after the EMP.

Their dangerous journey to Austin will put them in the crosshairs of desperate survivors who resort to despicable trickery, not only to take their belongings, but also their lives. Along the way, Chandler learns that Amanda hasn’t been completely truthful about her past—a past filled with unresolved loss and long-held secrets, leading to a future where the unknown has deadly consequences.

Just when they think they are safe, they find out the danger has only just begun.