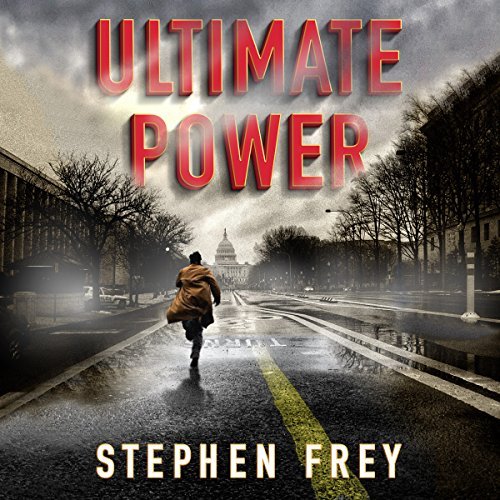 A Lot To This Story

Falcon, the youngest hedge fund manager to make partner at a prestigious Wall Street firm stumbles upon a “conspiracy tied to the US government – a rogue faction is manipulating the American people to establish a new order. Now facing impossible odds and a plot that goes all the way up to the nation’s leaders, Falcon must find a way to save not only his family but also his country.”

As I said in the title of this review, there is a lot to this story.  A lot of people and a lot going on. It bounces around a lot and if I wasn’t paying attention I could get lost pretty quickly.  Not that there is anything wrong with a story that has depth like this – I was more surprised that there were this many angles that Frey decided to take (and they all seemed to come together at the end).

I thought a few times that Ultimate Power was going to lose me but it would draw me back in.  I honestly almost stopped reading it because of a few random scenes that felt super out of place – I’m glad I didn’t.  It all came full-circle in the end. I just had a hard time figuring out what they all had to do with the story.

Frey can tell a great story, there is no questioning that.  The overarching story in Ultimate Power is one that should scare most Americans.  But some Americans might also find it laughable or too “conspiracy theory”-like (if that’s such a thing).  I was not one of those people.  I enjoyed where Frey took me and I thought that his writing about the secret inner-workings of the President and the White House staff was pretty interesting – fictional or not. The black book was a nice touch and the protector-above-all-protectors was something new and different I’ve never read before.

Getting past some of the seemingly random scenes (warning: there are some scenes that could trigger someone who has been sexually assaulted) – Ultimate Power was a book about a power struggle.  A book about trying to change America, and a book about the ultimate sacrifice for a job. If you enjoy thrillers that involve what I said above — you’ll probably enjoy this one.  If scenes of rape (no real actual scenes – just eluded) or conspiracy theory based novels bug you – skip this one.

Andrew Falcon Jr. is the youngest hedge-fund manager to make partner at a powerful investment bank on Wall Street. His career is soaring, and his financial future is secured. But with fortune comes a high price.

Just as Falcon thought life couldn't get better, his niece Claire is kidnapped - yet her abductors have no interest in money. They want information. In exchange for Claire's safe return, Falcon must dig deep into his firm's affairs, uncovering secrets worse than he could ever imagine.

He discovers a conspiracy tied to the US government - a rogue faction is manipulating the American people to establish a new order. Now facing impossible odds and a plot that goes all the way up to the nation's leaders, Falcon must find a way to save not only his family but also his country.

New York Times bestselling author Stephen Frey has spent twenty-five years working in private equity and investment banking at firms including J. P. Morgan & Company and Winston Partners. He is the author of twenty-three novels, including the Red Cell series: Arctic Fire, Red Cell Seven, and Kodiak Sky. He is currently a partner at Succession Capital in Virginia Beach, Virginia.