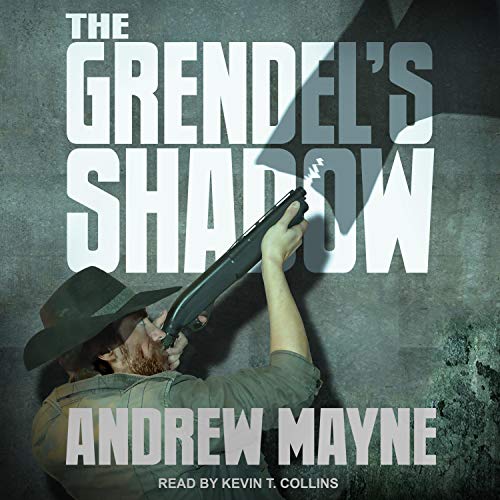 I honestly went into this book blind – only knowing that I really enjoy Andrew Mayne’s other books and assuming that he wouldn’t let me down with this one. I also liked that it wasn’t a super long book as I’ve been feeling burned out lately. So, I jumped into The Grendel’s Shadow with basically no idea what it was going to be about other than that cool cover.

What I didn’t expect was a steampunk-like futuristic, sci-fi, creature feature-type story. I’m glad I didn’t know that going in. I think it added to the “vibe” that I think Mayne was trying to write here. It was dirty and dark but also well written and story-driven. The characters where there but they weren’t super well fleshed out. You just sort of “knew” who they were and why they were there. As the story progressed you learned a bit more about them, but it was still a bit like meeting someone in real life. You learn as you go. At one point, Mayne even has one of the characters mention this in passing (saying that he came into town and told the townspeople that he was going to take care of it and they just trusted him to do that).

I mentioned above that this one is definitely cross-genre and I think that a lot of different readers would enjoy it. It wasn’t a masterpiece by any means, but a gritty old-school dime-novel-like book that was a couple hours of mindless enjoyment.

T. R. Westwood, distinguished professor of biology and the galaxy’s greatest hunter, is in for the biggest challenge of his career. When an unknown animal starts killing off settlers on a backwater planet run on coal and steam power, he’s the only person who can help stop the slaughter. Rocks and spears or shotguns and cannons, he’ll use whatever is allowed to get the job done.

In a post-singularity future where the human race has spread to millions of worlds, sometimes the native animal population isn’t exactly compatible with our expanding civilization. Taking advantage of a mind as sharp as his aim, Westwood is the only man you call if local wildlife gets out of control and starts devouring your local population.

Be Not Far from Me by Mindy McGinnis (Na