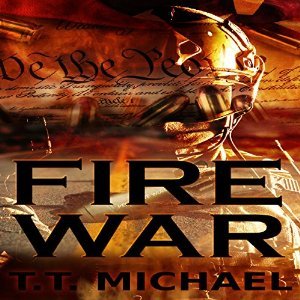 Definitely holds up to the dystopian classics

Fire War is about the United States in the near future – about 40-50 years or so into the future.  Terror has run rampant and many people are killed in the name of terror.  Something needs to be done, and something will be done.  Follow Gunnery Sergeant Anthony Jackson on his missions as a Marine to train and protect.  Along the way, things get muddled up and he must choose between what he thinks is right and what he has come to see along his journey.

Narration for Fire War was done by Patrick Freeman – this was my first book narrated by Freeman and I really enjoyed it.  His pacing and enunciation were really great.  Only a few times did I think he said a word wrong (but in reality it could be a location/colloquialism issue more than pronunciation).  The production quality was perfect with no issues at all.

So, my first thoughts were “I wonder what I’m getting into” and once I got further into the story I quickly realized that this book was right up my alley.  With roots in many of my favorite dystopian’s of the past, Fire War should be a must read for teenage year students (like I believe 1984 and the likes should be too).  I found myself drawing parallels to 1984, Fahrenheit 451, and Brave New World while I dug deeper and deeper into this story. But it was done in a new and different way. And in my eyes, that’s pretty amazing.

T.T. Michael’s writing style mixed with Freeman’s narration were a win-win for me with this book.  It was fast-paced without feeling like it skipped over details.  It had details without being bogged down.  A nice and neat book full of “what ifs.”  A few times I was worried that the book would dive deeper into a warning against certain things we are doing now, but it was far enough in the future that it didn’t feel preachy.  But it has roots in some things that are happening today (or will likely happen in the near future).

Overall, a great read for those who like old-school dystopian’s like I discussed above.  I’m not sure if Michael has a plan for more books, but I’m definitely intrigued.

The original review was posted on Audiobook Reviewer, a free copy of this book was provided in exchange for my honest and unbiased opinion.

Late in the 21st century, the United Continental States of America (or UCSA), comprising the former USA, Canada, and Mexico, is running smoothly: unemployment has been all but eradicated, terrorism is quashed in the country, and internal dissent diminishes by the day. Most people thank President Meyers for this. Many can no longer remember when there was last an election, but as long as he keeps the country safe from the terrorist group Hariq Jihad (‘Fire War’), this seems a small price to pay.

Gunnery Sergeant Anthony Jackson is the model Marine: highly trained, absolutely efficient, and unquestioningly dedicated to his country. The only thing he can conceive of putting before his nation is his family, his wife Courtney and two daughters Maya and MacKenzie. Conscripted into the personal security detail of President Meyers, he begins to get glimpses that not everyone is as content with the current situation as he is, but attributes this to terrorist agitation and fringe lunacy. When his older daughter Maya begins to question the creeping erosion of personal liberties and the revoking of democratic rights, however, he begins to fear for her safety, as well as his own and that of his family. In a climate in which entire families disappear due to minor offenses, one can’t be too careful.

The tensions between liberty and safety, between family and country, will force Jackson to rethink all his beliefs, and lead to a collision with the system he has dedicated his life to serving.

Fire War is a suspenseful, gripping and unnerving examination of the paradoxes of power, the price of liberty, and the dictates of conscience. The world you live in will never look the same again.

Perhaps you wouldn’t characterize the Finance Manager of your local automobile dealership as an Amazon best-selling author–until you get to know T.T. Michael. He has worked for the past decade at a Toyota Dealership in Illinois, but he is in the driver’s seat as the writer of, Fire War, a political thriller set in the year 2076. See what happens when the United States, Canada, and Mexico all join forces to make one super country. See more about him and his book Fire War at www.ttmichael.com