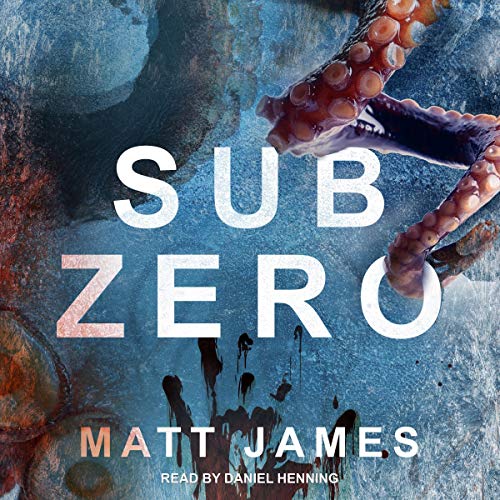 Kept Me Reading Late Into The Night

Another Severed Press and Tantor match up. I’m loving these. Going into it you know almost exactly what you’re going to get with that little bit of intrigue.  Severed Press puts out such interesting and different creature features that when I see a book that looks like one of theirs offered by Tantor I jump on it.  They’re also really good at matching a narrator to the story. SUB ZERO was no different.  Daniel Henning was able to tell this story in a way that really added to the overall feeling and vibe that James was going for.

The story itself doesn’t really take its time getting to the meat and the potatoes. At the halfway point there is already blood and guts and Mortal Combat-esque gore. We’re introduced to the creature early on – and honestly I figured it was just going to be about a killer octopus (or similar creature) but it was so much more than that. It’s a nice horror/creature story set in one of my favorite places (not just McMurdo Station but also on a sea vessel where escape is impossible [wow I feel dark admitting that].

SUB ZERO is one of those stories that going into it you understand that value you’re getting out of it – but you still enjoy it.  You know that things are gonna get bad. You know that no one can escape. But the way that James goes about it and tells the story turns it from a cookie-cutter Horror story into an interesting creature feature.

Overall, I enjoyed this one. I put it on and I was transported into the places the characters where. James and Henning were able to ramp up the fear levels and keep me interested late into the night.

The only thing colder than the Antarctic air is the icy chill of death….

Off the coast of McMurdo Station, in the frigid waters of the Southern Ocean, a new species of Antarctic octopus is unintentionally discovered. Specialists aboard a state-of-the-art DARPA research vessel aim to apply the animal’s “sub-zero venom” to one of their projects: an experimental painkiller designed for soldiers on the front lines.

All is going according to plan until the ship is caught in an intense storm. The retrofitted tanker is rocked, and the onboard laboratory is destroyed. Amid the chaos, the lead scientist is infected by a strange virus while conducting the specimen’s dissection.

The scientist didn’t die in the accident. He changed.