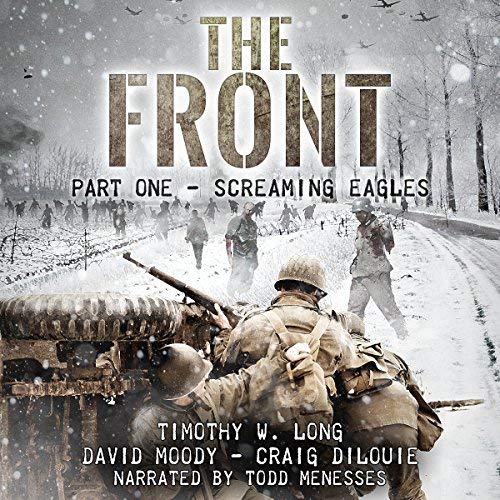 They thought they understood their enemy…

World War II — being in the trenches and fighting off the German soldiers was bad enough.  What would happen if the SS/Nazi’s came up with a new drug that made their soldiers almost unstoppable?  This is a story about that.

Todd Menesses narrates this story and absolutely crushes it.  He has an awesome history channel-like voice that really brings this story alive.  His performance (and yes, it truly was a performance) was perfect — voicing different characters from different areas in perfect dialects.  Menesses will definitely be a narrator that I will be looking for when I’m buying my next audiobook.

I’m a big history buff, I love studying the different wars and different time periods to figure out what life was like or what battle could have felt like.  I feel like Screaming Eagles really pulls off the feeling of “being there” in the trenches of World War II.  Granted there is a lot more going on than actually happened during the war, but that makes it an even better story.

Knowing that the SS were experimenting with drugs during this time makes this story even more believable.  There were a couple times that I actually wondered if something similar to this actually happened.

The pacing of the story was awesome, the reader is thrown from person to person and story to story throughout the book. As soon as you feel comfortable it changes to someone else — giving the story a multi-faceted look from many different points of view.

Screaming Eagles was a hell of a book — told like a true story during WWII — it was so realistic I felt like I was really there with these men.  I will definitely be looking forward to the next books in this series and I really hope that Menesses narrates those as well.

Private Franklin Grillo is a fresh faced infantryman in the 101st Airborne. He's been dispatched to the Ardennes Forest outside of Bastogne to assist Baker company against a surprise attack by the Germans. Outgunned, low on ammo, food, and supplies, the men along the new front are up against an army ten times their size.

Barely able to hold out the 101st now face a new threat. German soldiers who take massive amounts of damage but keep on attacking.

This is an alternative history that will sink its teeth into you.

"Timothy W. Long injects a stark degree of realism into everything he writes. His horror is more horrific, his heroics more heroic, I love reading his stuff." --Peter Clines, bestselling author of the Ex-Heroes series, 14, and The Fold

"Reading Timothy W. Long is like being in a knife fight that doesn't end until the last page." --Nicholas Sansbury Smith, bestselling author of The Extinction Cycle

THE FRONT 2: RED DEVILS
THE FRONT 3: BERLIN OR BUST

Also by this author: Pandemic (The Retreat #1), Symbiosis
Also in this series: Red Devils: The Front 2

Audiobook: The Speed of Sound by Eric Be