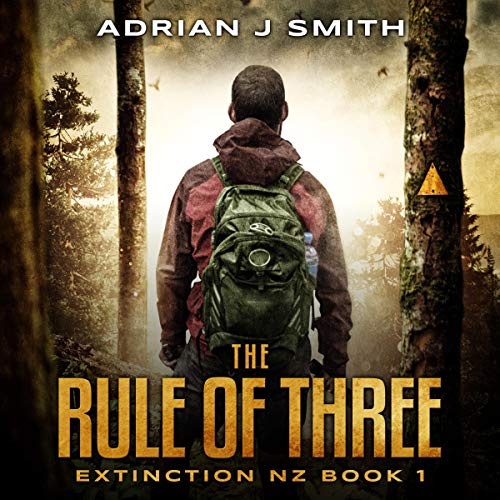 I have a hard time believing that Adrian J. Smith is a first-time writer.  The Rule of Three was so well written that it makes it really unbelievable.  Granted, he’s writing in a fabulously thought out world created by Nicholas Sansbury Smith, but the way that he took it and made it his own really speaks volumes.

(Slight tangent incoming).  I watch a YouTube couple (Kara & Nate) and I had just decided to watch them trek through New Zealand the other day.  That same day without realizing it, I started The Rule of Three. I loved that I was watching people explore a place I’ve never been but have always found beautiful – while reading a book about the same place. The irony is that Smith isn’t able to write about the beauty in the scenery since they are running for their lives throughout almost the entire book.

The monsters were already pretty well described when Smith penned this book, but he was still able to make it his own – and that’s one of the things I liked most in Rule of Three.  The alpha’s (and not only the alpha’s but the thing you don’t really learn until the very end) were extremely creepy and made my skin crawl.  The character building was near perfect. I felt like I could sit and get a pint with any of them and already know who they were and what they believed in. But, all of those gloating and praiseworthy quotes – Smith’s writing really shines when writing horror and action.  His horror scenes (generator room, getting away, etc) were so good. They had me simultaneously wanting to shut the audio off and keep going so that I knew what happened.  His action scenes also really helped move the story along.  There were scenes when you weren’t sure what was going to happen but along the way things improve (or don’t) and you think you guessed it only to be surprised at the end.

Overall, a great start to a series and a series that I will be checking out again.  Don’t miss The Extinction New Zealand Series).

What would you do to survive the apocalypse?

Jack Gee, hiking the New Zealand mountains, is blissfully unaware of the Hemorrhage virus sweeping the world. A desperate message from his wife, Dee, alerts him, and he must return to Hamilton. On the way, he is captured by flesh-eating Variants and taken to their meat locker. To escape, he will need to draw on all his experience as an outdoorsman, but first, he must find the will to survive.

Surrounded by Variants, Dee is trapped in her Hamilton basement with a group of survivors. With Jack missing, and dwindling food supplies, she must leave the basement, her only defense a katana.

The nightmare has just begun. Will they find each other in the chaos?