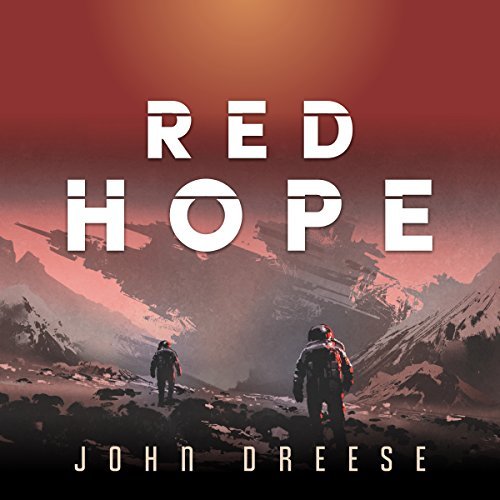 Red Hope was written if a hard science fiction, a normal sci-fi, and a mystery book all had a baby together.  There were definitely parts of hard sci-fi in this with some of the descriptions of the propulsion, the world that they find, and just the everyday life of the scientists on Mars.   The regular “old school” sci-fi was the premise and the struggles that the astronauts and scientists were going through.  The mystery part was the most intriguing.  Sure, any science fiction can have mystery in it, but this whole book was shrouded in it.

I did enjoy it, it wasn’t as tech savvy as The Martian, or as wonderful as some thrillers or mysteries that I usually read, but it was still a really enjoyable book.  Enjoyable enough that I definitely want to figure out what happens in the next book.

The narration, done by Bob Reed was good. He reminds me of a voice that I know from Hollywood but I can’t place the name even though I can see his face.  (I wanna say he was bigger in the 80’s but that doesn’t really help much here).  Regardless, Reed does a really nice job with Red Hope — helping move the story along nicely.

I have a bit of a spoiler question that I will attempt to write without spoiling anything.  Dear Mr. Dreese — unless there is a lot more explanation in the second book, why was the extra thing included on the ISS there (and that whole random plot-line there?)  Seriously, it felt so completely out of place with the entire rest of the story.  I was a little worried the entire book was going to take a weird turn from that point on.

Overall, Red Hope was good.  I definitely enjoyed reading it and will check out the next book if it’s released on audio.

For two million years, Mars has hidden a secret. Two hours ago, the Mars Curiosity rover found it. With less than a year to prepare, four modern-day astronauts are asked to leave their families behind and risk their lives on what will become the most dangerous mission humanity has ever launched. Will the Red Planet give up its real secret before the astronauts run out of time?

Red Hope is the first book of a fast-paced two-novel series. It has an entertaining ending with a mild cliffhanger leading into the second book, which is being written right now. Red Hope is intended for a general audience - you won't need a calculator or a slide rule to enjoy this adventure!

Also by this author: Blue Hope
Also in this series: Blue Hope