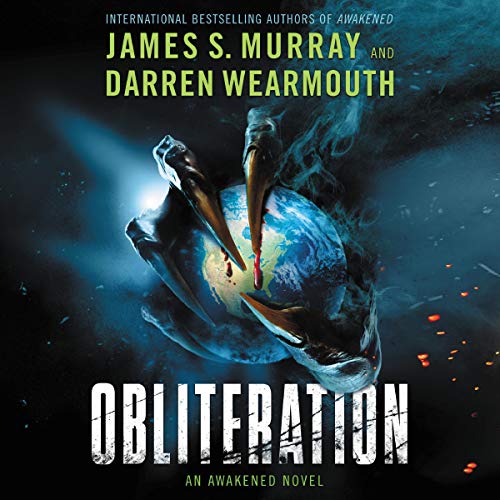 Tied Up A Lot Of Loose Ends For Me

Obliteration was the third (and seemingly final) book in the Awakened Trilogy. At this point in the series, we know most of the things that these monsters are capable of and know who most of the characters are. That said, Murray and Wearmouth throw a lot of that out of the window and introduce some new things almost right off the bat (which was refreshing, not frustrating).

We are shown the biggest creature yet (I won’t ruin who or what it was, but that was an interesting twist) and we’re shown later in the story just how powerful said beast is. The thing that shines in these books is the characters. They were really good again in this one and the character arcs were completed for pretty much every main character in the book (at least the ones that we care about).

Obliteration shows humanities “final” battle with these creatures and at times I wasn’t sure how it was going to end up. I was kept on my toes until almost the final chapter. I had guesses and I had things I’d hoped would happen, some of them happened and other things Murray and Wearmouth threw me for a loop.

Overall though, I thought that Obliteration was a strong entry in this series.  I’m glad it was the final book though, because in the trilogy it was the weakest entry, but it was still a solid book that really tied up a lot of loose ends and questions I had.

Evils both above and below ground arise once again, threatening the world and all its inhabitants with extinction in this electrifying science fiction thriller – the final novel set in the Awakened universe – from the number-one internationally best-selling author and star of television’s Impractical Jokers and a best-selling science fiction writer.

Thanks to the heroics of former New York City Mayor Tom Cafferty and his team, the world is once again safe. The villainous Foundation for Human Advancement has been dismantled, the cities of the world are safe from nuclear annihilation, and Cafferty is now on a hunt to decimate every nest of creatures on the planet.

When Cafferty enters a nest underneath the Nevada desert, he is horrified to find it completely empty. It can only mean one thing: the battle for survival is not over. Across the planet, creatures are emerging from their subterranean homes. Now, the all-out war against humanity has begun – a war in which only one apex species will survive. Humankind has finally met its match.

Cafferty knows that only one man can help him stop the onslaught. A man who is despised by the world. A man who has already caused the death of millions. A man who is a sworn enemy hell-bent on taking Tom Cafferty down forever: Albert Van Ness.

But even this desperate move may not be enough to stop the creatures and save humanity….