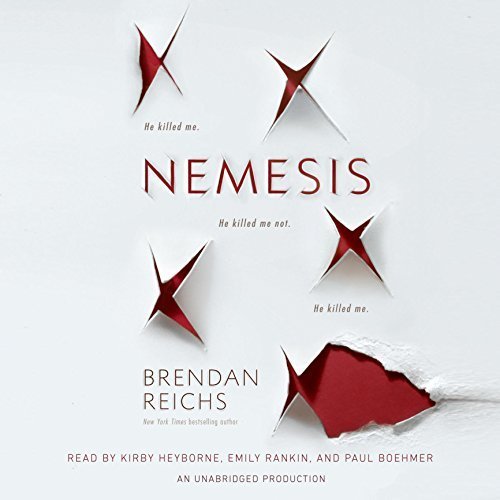 This audiobook caught my attention right from the onset. I have to admit at times it did slow but not enough to hinder the progress of the book. It has it all, conspiracy, secrets, natural and cosmic disasters and let’s not forget death and regeneration! Yes, that is correct regeneration. Oh and the characters are pretty awesome too. We have a cast of very different characters who all play a crucial part in the story.

The only thing that beats the premise of Nemesis is the way it was presented and told. There is a dual POV between main characters who have a completely different personality and outlook on life. They are also from opposite sides of the money spectrum. The pictures the author creates really give you a good idea of what is going on, however, it leaves much to the imagination behind closed doors and this is what drives the story.

At parts during the middle of the story it did drag a bit but there is a big payoff at the end of the book. The reveal is perfect enough to give you some closure but makes you click furiously to buy the next audiobook.

This is a triple narration and is done wonderfully. There is one narrator who was tasked with reading documents and transcripts. He does great at presenting the info in just the right way to avoid overacting. There are just a few chapters of this sprinkled throughout the story.

The 2 main narrators were so precise in tone that I was just as excited to hear each of them. They both kept it consistent throughout the story and voiced each other’s character great too as to not skew my imagination. Overall, a great experience that will surprise you along the way.

Definitely moving forward with this series. 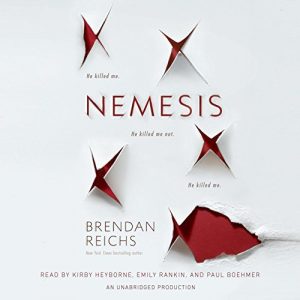 Orphan Black meets Lord of the Flies in this riveting new thriller from the co-author of the Virals series.

It’s been happening since Min was eight. Every two years, on her birthday, a strange man finds her and murders her in cold blood. But hours later, she wakes up in a clearing just outside her tiny Idaho hometown—alone, unhurt, and with all evidence of the horrifying crime erased.

Across the valley, Noah just wants to be like everyone else. But he’s not. Nightmares of murder and death plague him, though he does his best to hide the signs. But when the world around him begins to spiral toward panic and destruction, Noah discovers that people have been lying to him his whole life. Everything changes in an eye blink.

For the planet has a bigger problem. The Anvil, an enormous asteroid threatening all life on Earth, leaves little room for two troubled teens. Yet on her sixteenth birthday, as she cowers in her bedroom, hoping not to die for the fifth time, Min has had enough. She vows to discover what is happening in Fire Lake and uncovers a lifetime of lies: a vast conspiracy involving the sixty-four students of her sophomore class, one that may be even more sinister than the murders.

Buy from Audible
Also by this author: Genesis
Also in this series: Genesis