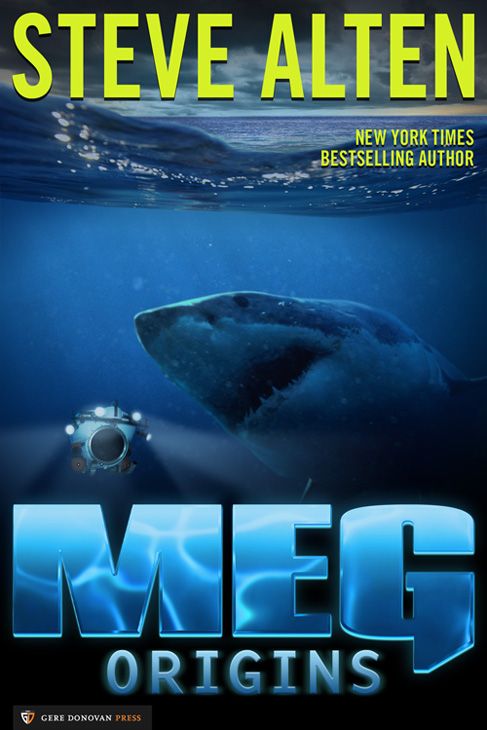 So I finished this book within an hour or so, but wow. It really made me want to go back and read the whole series again. This is a great short story/novella completely in the same vein as all the other “Meg” series books.

If you haven’t read any of them yet, read this and you will soon be reading the first book in the series, and if like myself, you’ve finished the entire series (that he’s written so far) this will have you chomping at the bits for another addition to the “Meg” family.

This is a great book to jump into the series to “get your feet wet” — Sorry, I couldn’t help myself.  You are introduced to the main characters of most of the series and if you’re like me — you’ll be grabbed right away and feel like you truly understand where they are coming from and what drives them.

Steve Alten is the master of this type of fiction, and has a movie deal out right now for the first book in the series “MEG”.  Check this novella out and see what you’ve been missing.

Commander Jonas Taylor is tasked with piloting the US Navy's most advanced submersible, the DSV Sea Cliff, to the bottom of Challenger Deep — 36,000 feet below the surface — into what is very much an undiscovered country. What he finds there — a remnant population of luminous, prehistoric Megalodons — will change the course of the rest of his life.

In this prequel to his New York Times Bestseller, Meg: A Novel of Deep Terror, Alten sets the stage for the popular suspense series to follow. Fans of Meg will find it a must for offering insight into key characters' backstories, but the novella-length work also stands alone as a bite-sized tale of deep-sea suspense.

Steve Alten grew up in Philadelphia, earning his Bachelors degree in Physical Education at Penn State University, a Masters Degree in Sports Medicine from the University of Delaware, and a Doctorate of Education at Temple University. Struggling to support his family of five, he decided to pen a novel he had been thinking about for years. Working late nights and on weekends, he eventually finished MEG; A Novel of Deep Terror. Steve sold his car to pay for editing fees. On September (Friday) the 13th, 1996, Steve lost his general manager’s job at a wholesale meat plant. Four days later his agent had a two-book deal with Bantam Doubleday.

MEG would go on to become the book of the 1996 Frankfurt book fair, where it eventually sold to more than a twenty countries. MEG hit every major best-seller list, including #19 on the New York Times list (#7 audio), and became a popular radio series in Japan.

Steve’s second release, The TRENCH (Meg sequel) was published by Kensington/Pinnacle in 1999 where it also hit best-seller status. His next novel, DOMAIN and its sequel, RESURRECTION were published by St. Martin’s Press/Tor Books and were runaway best-sellers in Spain, Mexico, Germany, and Italy, with the rights selling to more than a dozen countries.

Steve’s fourth novel, GOLIATH, received rave reviews and was a big hit in Germany. It is being considered for a TV series. MEG: Primal Waters was published in the summer of 2004. A year later his seventh novel, The LOCH, hit stores — a modern-day thriller about the Loch Ness Monster. Steve’s eighth novel, The SHELL GAME, is about the end of oil and the next 9/11 event. The book was another NY Times best-seller, but the stress of penning this real-life story affected Steve’s health, and three months after he finished the manuscript he was diagnosed with Parkinson’s Disease. Steve’s ninth novel, MEG: Hell’s Aquarium, is considered to be the best of the best-selling MEG series. Steve says his best novel is GRIM REAPER: End of Days. The story, a modern-day Dante’s Inferno, takes place in New York when a man-made plague strikes Manhattan. The release date was 10-10-10. His eleventh novel. PHOBOS: Mayan Fear is the third in the Domain series and will debut in the Fall of 2011 (Tor/Forge).

Steve’s novels are action-packed and very visual. He has optioned DOMAIN, MEG and The LOCH to film producers. Steve has written six original screenplays. His comedy, HARLEM SHUFFLE was a semi-finalist in the LA screenwriting contest, his psychological thriller, STRANGLEHOLD, was selected as a finalist at the Philadelphia film festival and his reality series, HOUSE OF BABEL won at Scriptapalooza. He has also created a TV Drama, PAPA JOHN, based on his years coaching basketball with hall of Fame coach John Chaney.

Over the years, Steve has been inundated with e-mail from teens who hated reading …until they read his novels. When he learned high school teachers were actually using his books in the classroom (MEG had been rated #1 book for reluctant readers) Steve launched Adopt-An-Author, a nationwide non-profit program designed to encourage students to read. Teachers who register for the program (it’s free) receive giant shark posters, free curriculum materials, student-author correspondence, an interactive website, and classroom conference calls/visits with the author. To date, over 10,000 teachers have registered, and the success rate in getting teens to read has been unprecedented. Steve now spends half his work week working with high schools. For more information click on www.AdoptAnAuthor.com

As an author, Steve has two goals. First, to continue to work hard to become a better storyteller and create exciting page turning thrillers. Second, to remain accessible to his readers. Steve reads and answers all e-mails, uses the names and descriptions of his loyal fans as characters in all his novels, and even hires readers as editors, depending on their particular expertise.

Undisclosed by Steve Alten (Narrated by