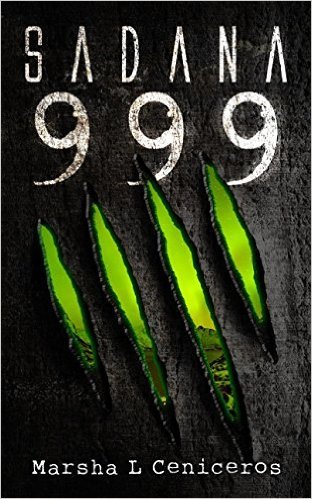 Sadana 999 will restore your faith in science fiction

In a remote part of Alaska (well what part of Alaska isn’t remote to the average American) there is a futuristic military base that is run by the crazy-man General Ascot who gets pleasure out of torturing his victims that has the misfortune of being at this specific base.  Suddenly a Nobel Prize winning scientist is awoken in the middle of the night and escorted to this base and what he will find (and is forced to be a part of) will shock you.

Science fiction is a genre that can be written extremely gritty and fast-paced without a great use of the english language.  And for the most part, I’ve never had a problem with this.  Sadana 999 is not one of these books.  Ceniceros has a wonderful grasp of the english language and you can see that on display throughout this novel.  The nicest part about it is that it doesn’t feel like she’s doing it to show how much she knows.

The characters were incredibly well written and described.  The people who were meant to be brutal and upfront were so without question, and the others who were meant to be more caring–you felt for them.  A sign of a great writer is when they can write words on a page that make you feel something.  Ceniceros has done this with Sadana 999.

If you’re a science fiction fan, I wouldn’t skip over this. It’s a point of view that feels both done before and totally new.  Which means that you’ll understand almost everything that’s at play within the book, but it’s done in a new light.

This is also one of those books where I feel like I can’t write too much about the actual plot because it would give too much of it away.  You’re just going to have to buy the book and find out for yourself!

However, the futuristic Alaskan Military base is controlled valiantly by General Ascot, a psychopath who plays mental games with his chosen victims. Doctor Peru, a fascinating character, is also highly intriguing as the number one biology and geneticist expert in the world, winning the Nobel Prize in the year 2714. Abruptly awakened in the early morning hours at his home in Europe by Military personnel and escorted to Alaska immediately, Doctor Peru’s life will change forever within the unrelenting power of General Ascot’s control. In conclusion, this science fiction novel infused throughout with alien experiments and unparalleled action and thrills. Sadana 999 has everything a perfect science fiction needs: aliens, corruption, and the pure struggle to survive. With in-depth characters and fast-paced action, this is a must-read for fans of both science fiction and post-apocalyptic works!

Marsha Ceniceros was born in Indianapolis, Indiana and raised up in Southern California. A magnificent writer of science fiction and poetry. Receiving several awards in the past for her poetic skills. Her two newly released books are poetry book Perçu and science fiction novel Sadana 999. Author of: Taking The Mind for a Ride and Flames of Torment. We can expect to see her second science fiction novel in 2016.