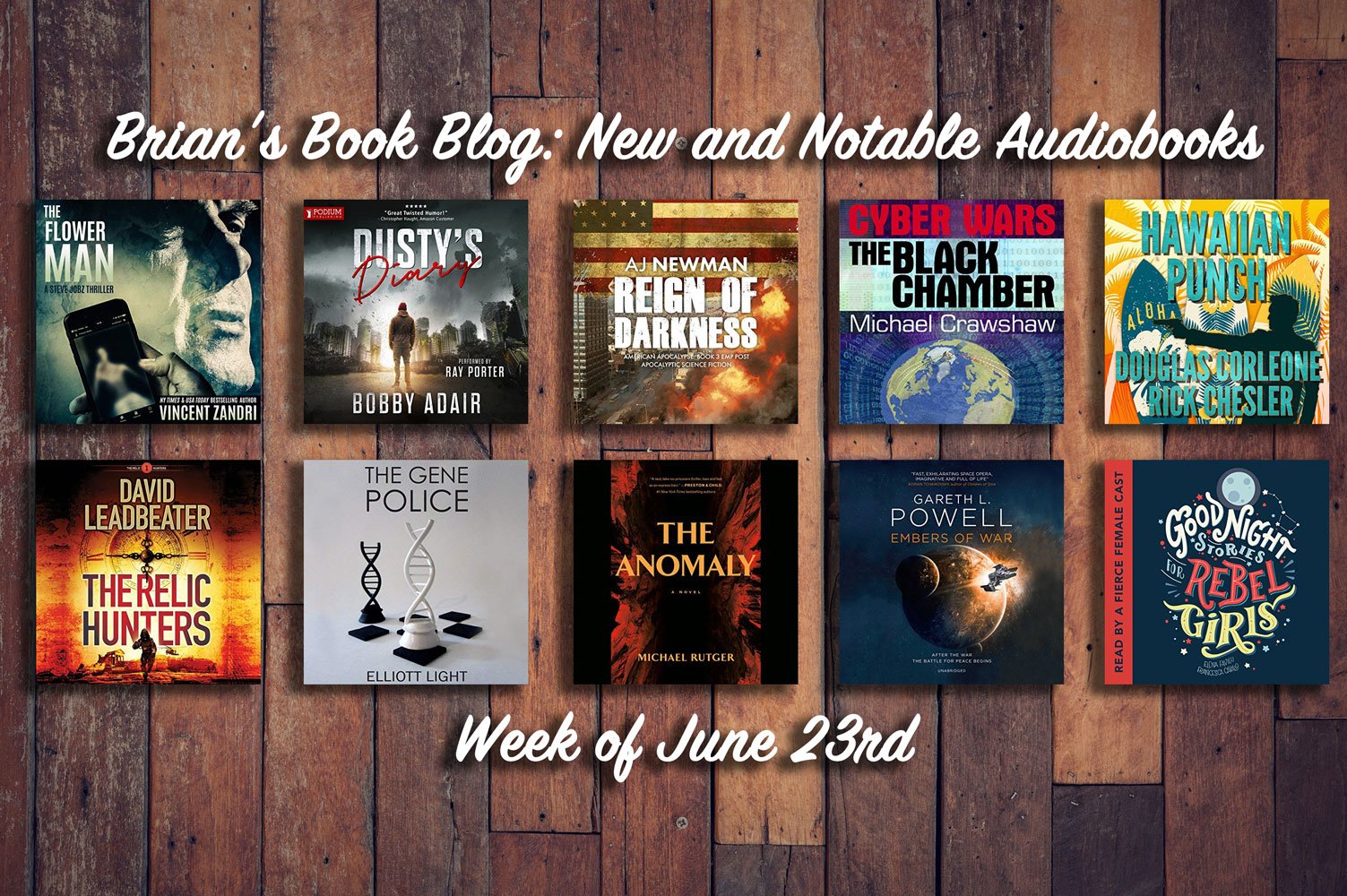 Welcome to Brian’s Book Blog’s weekly New and Notable Post for the Week of June 23rd.  We share the 10 books from this week that caught our eye featuring mostly Post-Apocalyptic, Science Fiction, and Thrillers with a few others thrown in. Enjoy! 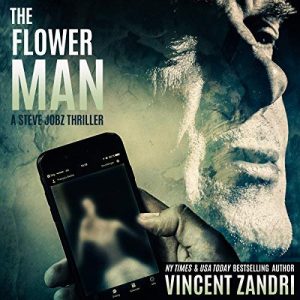 The Flower Man by Vincent Zandri
Narrated by Andrew B. Wehrlen

“Sexual harassment in the workplace will not only ruin your career, it will get you killed.”

Private investigator and anti-hero Steve Jobz has screwed up big time. He had one too many the night before, and it gave him the courage to text photos of his naked chest to his hot new coworker at the State Department of Insurance Fraud Agency. While the lovely Kate is keeping quiet about the texts, Jobz feels like the boom is about to come down on him when his boss orders him into her office. Seems homicide detective Nick Miller wants a face-to-face with the former cop.

But what Miller wants has nothing to do with Jobz’s texts. Instead, they have everything to do with a local television news personality known to all as “Mr. TV”. Much like Jobz, the lovable news anchor has also texted photos of himself to a coworker, but these photos were not of the relatively tame chest-high variety. Rather, the pictures were taken below the belt. As a result, Mr. TV is not only getting sued, but is being issued death threats from the victim’s Russian immigrant father.

When Miller assigns Jobz to personally watch over Mr. TV and his cougar wife, Janice, what he discovers is that the couple are up to their necks in more than just a sexting scandal. They are in fact broke and living on cash that is coming from a very unlikely source: the Russian mob. What follows is a quagmire of sex, shootouts, serial murder, and a quirky private detective who just can’t keep himself from getting in trouble with the ladies.

Like The Embalmer, the first novel in the new Steve Jobz PI series created and written by Thriller Award-winning, New York Times and USA Today best-selling author Vincent Zandri, The Flower Man culminates with an explosive climax and promises to keep listeners glued to their chairs for hours. For fans of Michael Connelly, Robert B. Parker, Charlie Huston, Jim Crumley, Lee Child, Brett Battles, and more.

Nab this thriller today before it’s too late! 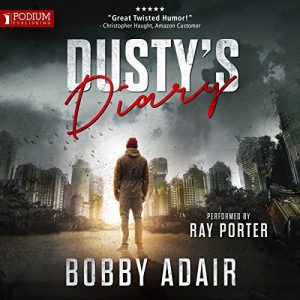 It was a fungus spore that finally did it, knocking humans off the top of the food chain, with a lot of help from a pharma company too busy thinking about oversized profits rather than subpar outcomes. Most folks died, if not from the fungus, then from the riots and starvation that came when the grocery store shelves emptied and the spigots ran dry. Plenty of other folks lived on with the fungus growing in their bones, rooting in their brains, and turning them three-quarters crazy.

That’s when I moved underground and sealed the hatch shut on my backyard bunker. I was safe, with all the food, water, and entertainment I needed for five or six years. I had DVDs to watch, music to listen to, and books to read. Prepping had paid off for me.

At least it seemed so at first.

After a time, my radio stopped picking up signals from the world up top and for all I knew I was the last man alive on Earth. I’d planned for that possibility, yet never truly accepted things could turn out that way. The loneliness set in, gnawing at me and making me think crazy thoughts, including one that would change everything. Two years on, I opened the hatch and climbed out of my bunker.

I had to see if anyone but me was left. 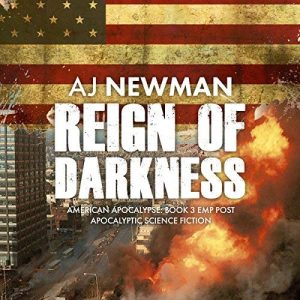 Book 3 of the series American Apocalypse.

Darkness brought on by criminals, drug addicts, and traitors in the band make life even more difficult. Our hardy band of survivors have at least temporarily solved the basic needs issues and have food, water, shelter, and weapons. Now they must seek out like-minded people to join their mutual assistance group and eliminate the criminals who want to be dictators.

Joe’s Grandma’s letters continue to motivate Joe and help him search for the promised treasure. One find startles the group and promises a safer life. Another find is a major disappointment. Joe loses some people close to him but finds some new friends along the way. Can Joe become the leader the group desperately needs? Will the group survive? Will we learn what happened to the Muslim terrorists?

Listen to Reign of Darkness to discover the answers. 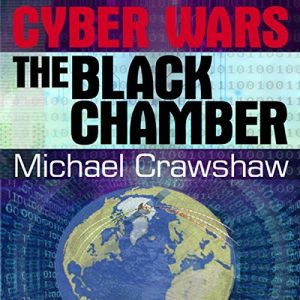 When America’s infrastructure comes under attack from hackers, the world’s most powerful military doesn’t know how to respond. Where should it aim its missiles? Could ISIS or North Korea be behind the cyber attacks? And why does a London hedge fund always bet the right way before each market-moving strike?

Enter FBI cyber expert Declin Lehane. But before he can find the real enemy and prevent the crisis from escalating into a global conflict, he must battle the establishment elite, interagency politics, and his own prejudice.

Now available as an audiobook by award-winning narrator R.C. Bray. 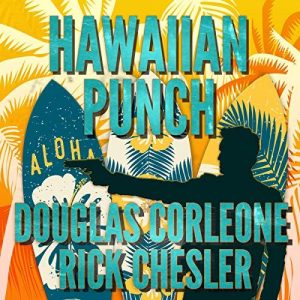 When newly licensed Honolulu private eye Nate Savidge hits the streets to track down the killer of a local college student, he soon discovers there’s a dark side to paradise. With the help of criminal lawyer Jake Harper, Nate takes on a city teeming with violence and corruption to keep an innocent 17-year-old from a life behind bars.

But only once he survives an attempt on his life does Nate fully realize that he has become a target – and that the killer he’s been searching for may be much closer than he thinks. 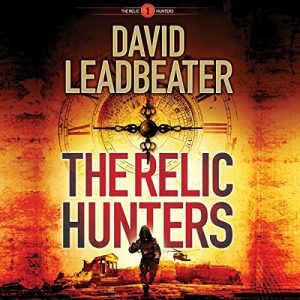 The Relic Hunters by David Leadbeater
Narrated by Pete Simonelli

A lethal secret society. A priceless stolen treasure. A map worth killing for.

Relic smuggler and expert thief Guy Bodie is a tough man in a dangerous world, loyal only to his elite team of five. But when one of them betrays him, landing Guy in a hellish Mexican prison, he finds himself making a bargain with the most unlikely new ally: the CIA.

There is a catch. In return for being released from jail, Guy must work for the CIA, helping them solve the most audacious heist in history. As Guy knows, six of the Seven Wonders of the World have long been lost. But with the help of the CIA, he learns that the destroyed Statue of Zeus still exists – and it’s in the hands of a powerful secret society.

A prize worth killing for is also worth dying for, and this one has left a trail of bloodshed that goes back centuries. Can Guy and his new team – a group of renegades chosen for their unique skills – hunt down the legendary relic once and for all…before they are added to its list of victims? 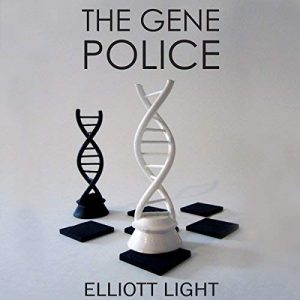 The Gene Police by Elliott Light
Narrated by James Romick

Before the words white supremacy filled the airways, before we learned of American Nazis and the alt-right, before there was a Muslim ban, before we considered building a wall or knew what DACA stands for, there was eugenics – a pseudoscience that promoted the belief that a race could be improved by controlling who was allowed to mate with whom.

It was eugenics that compelled white doctors to attempt to murder Baby John. It was compassion that led to his kidnapping. And it is the cruelest of circumstances – the murder of Jennifer Rice – that 50 years later leads Shep Harrington to search for Baby John.

As Shep soon learns, the quest brings him to the top of a slippery slope with an ill-defined edge. Question begets question, and the slide down the slope proves inevitable: What happened to the baby? Who took it? Why was he taken? And who killed Jennifer Rice?

When Shep learns that Baby John was born at a hospital run by Alton Nichols, a famous Virginia eugenicist, he is drawn into the dark history of the American eugenics movement and its proponents – the so-called “gene police”. 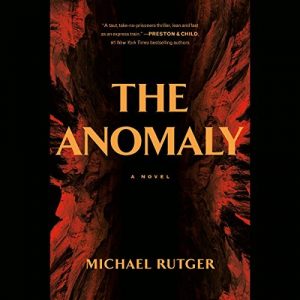 The Anomaly by Michael Rutger
Narrated by Brandon Williams

Not all secrets are meant to be found.

If Indiana Jones lived in the X-Files era, he might bear at least a passing resemblance to Nolan Moore – a rogue archaeologist hosting a documentary series derisively dismissed by the “real” experts, but beloved by conspiracy theorists.

Nolan sets out to retrace the steps of an explorer from 1909 who claimed to have discovered a mysterious cavern high up in the ancient rock of the Grand Canyon. And, for once, he may have actually found what he seeks. Then the trip takes a nasty turn, and the cave begins turning against them in mysterious ways.

Nolan’s story becomes one of survival against seemingly impossible odds. The only way out is to answer a series of intriguing questions: What is this strange cave? How has it remained hidden for so long? And what secret does it conceal that made its last visitors attempt to seal it forever? 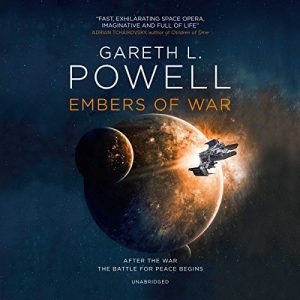 The sentient warship Trouble Dog was built for violence, yet following a brutal war, she is disgusted by her role in a genocide. Stripped of her weaponry and seeking to atone, she joins the House of Reclamation, an organization dedicated to rescuing ships in distress. When a civilian ship goes missing in a disputed system, Trouble Dog and her new crew of loners, captained by Sal Konstanz, are sent on a rescue mission.

Meanwhile, light years away, intelligence officer Ashton Childe is tasked with locating the poet, Ona Sudak, who was aboard the missing spaceship. What Childe doesn’t know is that Sudak is not the person she appears to be. A straightforward rescue turns into something far more dangerous, as Trouble Dog, Konstanz, and Childe find themselves at the center of a conflict that could engulf the entire galaxy. If she is to save her crew, Trouble Dog is going to have to remember how to fight … 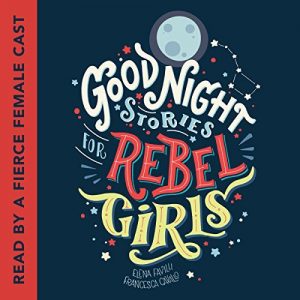 Good Night Stories for Rebel Girls will inspire young girls (and their mothers, their aunts, their cousins…) to be confident, to dream big, to cultivate their strength. Trade in princesses for presidents. Swap out Cinderella for Cleopatra tonight.

Includes a PDF of two written exercises: “Write Your Story” & “Draw Your Portrait”.

May 19th: New And Notable Audiobooks