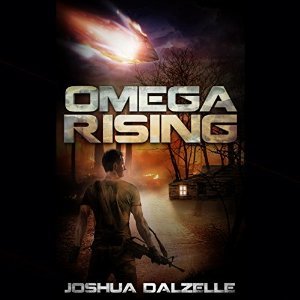 Prepare yourself for a page-turner, Omega Rising will have you up late into the night until you finish it.

Jason Burke is a man escaping.  He escaped normalcy by moving out to the middle of nowhere to “get away.”  One night, Jason noticed an object streak across the sky and what seemed to crash not too far from his cabin in the middle of nowhere.  As he searches around the seemingly alien aircraft, he is suddenly no longer on Earth.  He’s now in a world he is not familiar with and will try and do anything to get himself back home.

Narration for Omega Rising was done by Paul Heitsch.  This is the second (actually back-to-back) book I’ve listened to that Paul has narrated.  He definitely is a narrator to look out for.  His style is slightly “edgy” with a very relatable tone.  Or at least it was with Jason’s character in this narration.  In his others books, I found Heitsch was super easy to listen to, even for long periods of time.  Allowing me to cruise through the audiobook.  The quality and mastering of this audiobook was perfect too.  No noticeable issues or problems at all.

The story was interesting to me, when I started reading it, I was thinking “am I reading a survival book?”  Which would have been fine, but I was trying to piece together a wilderness start with a space adventure that was promised in the cover and description. Well, it didn’t take long for me (and Jason) to be swept into a world of space adventure.

I really liked Jason in this story.  He was relatable while being “standoffish” at times.  Making him the ultimate main character to be followed in this story.  I wasn’t sure how I was going to like him in the beginning, because he seemed like a hermit or just incredibly self-centered.  But, as the story progressed my feelings about Jason and his own feelings about himself seemed to melt away.

Without giving much away about the story, just be warned that you are in for some pretty awesome science fiction adventure here.  Omega Rising does not leave much on the table as far as “I wonder what…?” situations.  Burke is thrown into some pretty amazing and interesting situations throughout the book that made this an awesome story to follow.

Prepare yourself for a page-turner, Omega Rising will have you up late into the night until you finish it.

I was given a free copy of the book in exchange for my honest and unbiased review.

Jason Burke was a man hiding from himself in a small cabin high in the American Rocky Mountains when his simple, quiet life was shattered one night by what he first assumed was an aviation mishap. But when he investigates the crash, what he finds will yank him out of his self-imposed exile and thrust him into a world he could have never imagined.