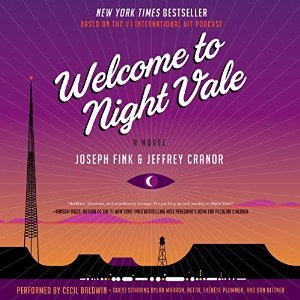 Narration for this was done by the narrator of the podcasts and a bunch of other people.  Each narrator added a nice element to the creepy and bizarre style that is the Night Vale way.  The podcast never sounded like a podcast, and this doesn’t sound like an audiobook either.  It definitely is a “must-listen” for those who have already found themselves drawn into the podcast.

Going into this I wasn’t sure what I was getting myself into.  I was given a very “DUDE YOU HAVE TO LISTEN TO IT” review of the podcast way back when, so I listened to it with no expectations.  I loved it, it was weird, bizarre, and other synonyms for those two words combined.  This novel was the same way.  It is unlike anything I’ve ever read, listened to, or enjoyed before.  But I found myself drawn to it.  I couldn’t put it down, it was like someone was there in the room with me holding me there, but not in an uncomfortable way.

Welcome to Night Vale is not for everyone.  It is a very eclectic book.  There are a lot of themes and stories going on.  But if you have any idea of the podcast or what’s in store for you when you are choosing this book — I don’t think you’ll be disappointed.

Night Vale is one of those places that I think I would like to visit, but then again not at all.  Who knows what would happen then?

One of my only complaints is that I think that this should have been named something slightly different from the podcast.  Some people may be confused into thinking that they were getting an actual novelized transcript of the podcasts.  My other complaint is with so many different narrators I found it hard to follow some nights.  But others the numerous narrators made it easy to listen to.  Maybe it’s just the book itself.  Such is the Night Vale way.

Review was originally written and posted on AudiobookReviewer.com.  I was given a free copy in exchange for my honest and unbiased review.

From the creators of the wildly popular Welcome to Night Vale podcast comes an imaginative mystery of appearances and disappearances that is also a poignant look at the ways in which we all struggle to find ourselves…no matter where we live.

“Hypnotic and darkly funny. . . . Belongs to a particular strain of American gothic that encompasses The Twilight Zone, Stephen King and Twin Peaks, with a bit of Tremors thrown in.”–The Guardian

Located in a nameless desert somewhere in the great American Southwest, Night Vale is a small town where ghosts, angels, aliens, and government conspiracies are all commonplace parts of everyday life. It is here that the lives of two women, with two mysteries, will converge.

Nineteen-year-old Night Vale pawn shop owner Jackie Fierro is given a paper marked “KING CITY” by a mysterious man in a tan jacket holding a deer skin suitcase. Everything about him and his paper unsettles her, especially the fact that she can’t seem to get the paper to leave her hand, and that no one who meets this man can remember anything about him. Jackie is determined to uncover the mystery of King City and the man in the tan jacket before she herself unravels.

Night Vale PTA treasurer Diane Crayton’s son, Josh, is moody and also a shape shifter. And lately Diane’s started to see her son’s father everywhere she goes, looking the same as the day he left years earlier, when they were both teenagers. Josh, looking different every time Diane sees him, shows a stronger and stronger interest in his estranged father, leading to a disaster Diane can see coming, even as she is helpless to prevent it.

Diane’s search to reconnect with her son and Jackie’s search for her former routine life collide as they find themselves coming back to two words: “KING CITY”. It is King City that holds the key to both of their mysteries, and their futures…if they can ever find it.