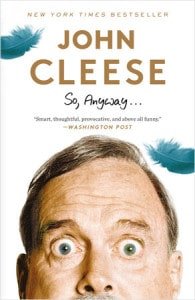 So, Anyway… An interesting AND funny look into the life of John Cleese.

Can you imagine a world without John Cleese?  A world without Monty Python?  Seriously just pause for a moment and think about the waves of change that would mean for the world of comedy.  This almost happened.  Cleese was about to become a lawyer when he got his job at the BBC, and as they say, the rest is history.

Reading this book really made me belly laugh a lot.  Cleese is an incredibly well worded and funny man.  His life has been incredibly interesting and full of twists and turns.  This book goes through many of them and it really felt like I was in for a ride from the moment I started reading this.

At 400 pages, this is a BIG book for a memoir (of a comedian at least).  But if you consider all that Mr. Cleese has gone through in his life — it doesn’t feel like 400 pages is enough.  This book is crammed full of stories that a long-time fan will find themselves smiling and enjoying as they leaf through the pages.

I recommend this book if you are interested in John Cleese, Monty Python, or just reading a story about an incredibly interesting man who has done some extraordinary things.

I’m REALLY glad I took the time to read this.

I received this book from Blogging for Books for this review.

John Cleese’s  huge comedic influence has stretched across generations; his sharp irreverent eye and the unique brand of physical comedy he perfected with Monty Python, on Fawlty Towers, and beyond now seem written into comedy’s DNA. In this rollicking memoir, So, Anyway…, Cleese takes readers on a Grand Tour of his ascent in the entertainment world, from his humble beginnings in a sleepy English town and his early comedic days at Cambridge University (with future Python partner Graham Chapman), to the founding of the landmark comedy troupe that would propel him to worldwide renown.

Cleese was just days away from graduating Cambridge and setting off on a law career when he was visited by two BBC executives, who offered him a job writing comedy for radio. That fateful moment—and a near-simultaneous offer to take his university humor revue to London’s famed West End—propelled him down a different path, cutting his teeth writing for stars like David Frost and Peter Sellers, and eventually joining the five other Pythons to pioneer a new kind of comedy that prized invention, silliness, and absurdity. Along the way, he found his first true love with the actress Connie Booth and transformed himself from a reluctant performer to a world class actor and back again.

Twisting and turning through surprising stories and hilarious digressions—with some brief pauses along the way that comprise a fascinating primer on what’s funny and why—this story of a young man’s journey to the pinnacle of comedy is a masterly performance by a master performer.

Want more info or to read an excerpt? Click here 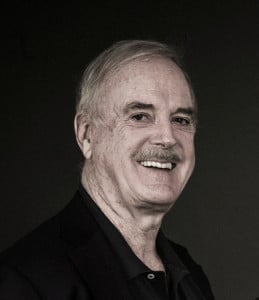 JOHN CLEESE cofounded the legendary Monty Python comedy troupe, writing and performing in the first three TV seasons of Flying Circus and in films that include Monty Python and the Holy Grail and Life of Brian. He cowrote and starred in the sitcom Fawlty Towers, and wrote and costarred in A Fish Called Wanda and Fierce Creatures. He has also coauthored two best-selling books on Psychology.