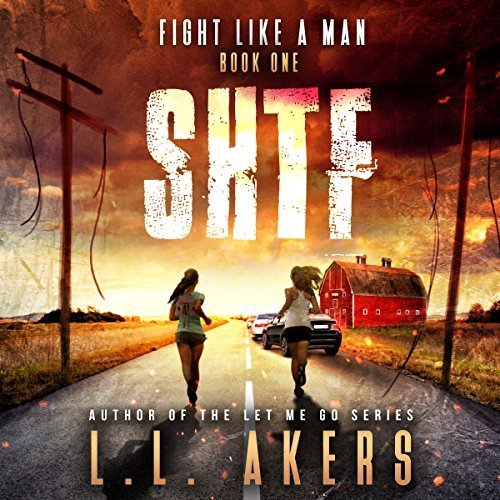 When SHTF What Will You Do?

When I first saw the cover of Fight Like A Man a month or two ago I knew I was interested.  I was hoping that it was going to feature more of a woman’s point of view.  It did, but it’s so much more than that.  Akers is able to throw in practical advice (go bags, how to make fire, what to keep/rotate), etc) to make this a more than just a story. I think that’s what she was going for — making an entertaining story that could also help teach and help others prepare. When I saw that Akers signed Kevin Pierce to narrated it, I was in for good.

The cast of characters in this were all pretty likable and were all getting out of their own bad times.  The “bad guys” and antagonist were pretty stereotypical and one-sided but it didn’t bother me. Their interactions weren’t as often as I expected them to be, but when they did happen it felt like Akers was a little nervous to get too much into violence or full out panic mode.

This book has a fair amount of cursing and vulgarities in it which doesn’t bother me in the slightest.  People can be crude and vulgar.  It’s a part of life. But, if that sort of things bugs you, you should know by the SHTF and what that stands for that this story might trigger you a bit.  Just a word of warning.

I liked the story enough that I definitely want to continue reading the series, especially with Kevin Pierce narrating it. He gives is an air of authority since he narrates so many post-apocalyptic books. Akers and Pierce made a nice team and really helped bring this book to life.

Overall, a nice “starter” PA book. It had a lot of elements (and a lot of unknowns left for the readers’ interpretation) which could make some readers love it and others feel like something was missing.  The biggest misstep, in my opinion, I’ll cover last.

*Personal belief rant below, if you’re political or like to argue politics, please just avoid!*

This is a solid 4 in my book if one thing were to change.  If Akers were to take out the mention of Trump.  I completely understand what she was going for and why she used him to write the story, but he’s so polarizing that some people might either think you’re making fun of them or just stop reading the book for being too political. I only write this because it was a major turn off for me.  I heard the parts about Trump and the MAGA stuff and I was trying to ignore them but it frustrated me. She could have written about a polarizing President and pretty much wrote about the campaign and people with mentioning Trump.  He could have even been named something similar like President Johnald Drammp or something.  Using a real political figure in a book (one that is still around) can be a gutsy move. In my opinion it didn’t work in this, but others could disagree.

As a prepper, Grayson Rowan was prepared for almost anything; anything other than being totally alone when the sh*t hits the fan.

While he sat back and watched the United States rattle swords with Korea, play chicken with Russia, and strong-arm China, he felt sure if the lights went out, that he and his family would be ready and safe--whether it was due to a natural disaster or a man-made event. They had everything they needed at their homestead.

What he wasn't prepared for, was his family not being home if it ever happened.

Olivia Rowan is with her sisters, Gabby and Emma, on a girls-only trip to Myrtle Beach. When chaos erupts and there's no gas, their journey home is a nightmare, filled with predators and danger--and apparently, Olivia hadn't learned a thing her husband tried to teach her.

When your neighbors run out of food and water, and turn on each other, what will you do?

Jake, a country boy mechanic, never believed in TEOTWAWKI, but he'd heard his brother-in-law preach about it many times. He knew what to do; but he didn't prepare. He lazily left it all up to Grayson--he was the prepper after all. When catastrophe strikes, will he continue to keep his head stuck in the sand while his clueless neighbors destroy each other, and his wife is stuck out on the road; or will he stand up and fight like a man?

And if you're alone? Bug in or Bug out?

Graysie Rowan, a freshman at University, just wants to go home. When no word comes from the government, and the state capital is overrun with looters, chaos and mayhem, the college administration puts the students on lock-down. But her dad, Grayson, had prepared her for this. Now, if she can only remember what it was he said to do...

If they want to survive this post-apocalyptic event, they'll all have to learn to fight like a man.

The end came not with boots on the ground, nuclear weapons or an EMP. It snuck in with a quiet clatter at the back door and flipped the switch, covering the states in darkness and sending this family on three divergent paths that ultimately lead home. When they collide in this surreal and gripping family drama, it won't be without bullets and bloodshed.

Akers writes Speculative Fiction/SciFi Post Apocalypse Thrillers that are dripping with suspense. The SHTF Series is a ripped-from-the-headlines story of the power grid going down across the entire United States. Who is the attacker? Could be N. Korea (with help from Iran or Russia?) Could be Russia. Could even be China… Read the series to find out.

Preparedness is not just fiction for the Akers family. It’s a lifestyle that brings them peace of mind to be ready for whatever catastrophes life throws their way.

4 thoughts on “Audiobook: Fight Like a Man (SHTF #1) by L.L. Akers (Narrated by Kevin Pierce)”