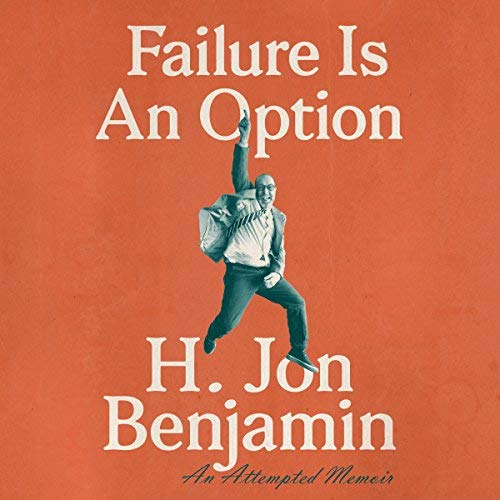 Hilarious Through and Through

You might be familiar with H. Jon Benjamin from shows like Archer and Bob’s Burgers – but this book talks very little about that and gives you a much broader look on all of the failures that Benjamin faced on his way to being where he is today.

Told almost like an anti-self-help book, Failure is an Option was a blast to listen to – hearing him tell stories of his failures was both enlightening and hilarious.  He had a way of telling the stories so that you felt for him along the way – but also knew he was going to make you laugh throughout.

I particularly liked the email correspondences with the two history professors one where he wouldn’t help at all and the other where he was extremely helpful. I cracked up throughout both of those and couldn’t stop the smile on my face when I realized where it was going.

I was familiar with the final story in this memoir because of a podcast I listened to where Jon was the first guest (it was Aisha Tyler’s, I believe) where he told the story about the rental car and the hotel.

Overall, the audiobook version of Failure is an Option was really enjoyable and I think that listening to him tell his own stories makes a book like this work even more than the print version.  I laughed throughout this and found it endearing.

Actor, voice actor, and comedian H. Jon Benjamin helps us all feel a little better about our own failures by sharing his own – despite his success starring on Archer and Bob’s Burgers – in a hilarious, self-helpful memoir.

While he’s not quite a household name, most people would consider H. Jon Benjamin, the voice-actor star of Archer and Bob’s Burgers (and a sentient can of mixed vegetables in 2015’s Wet Hot American Summer) a comedy show business success. But he’d like to remind everyone that as great as success can be, failure is also an option. In a hilarious, self-deprecating memoir, Jon lays out some of his many failures in all areas of life, from Work (“wherein I’m unable to deliver a sizzling fajita”) to Family (“wherein a trip to PF Chang’s fractures a family”).

Fans of his characters’ signature wit and voice will rejoice in H. Jon Benjamin’s comical failures – and appreciate a rare look into the life of the man behind their favorite shows.