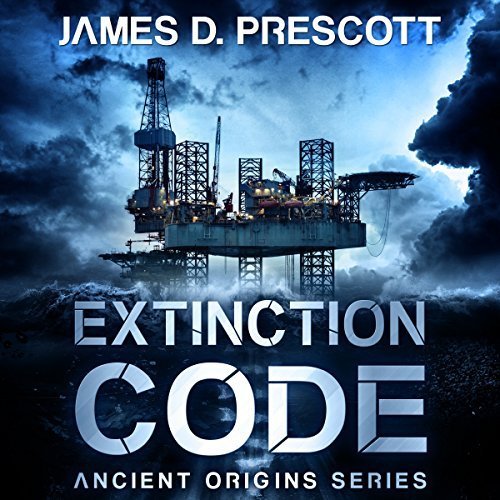 This has two different plot lines, which converge at the end. On one side we see Geophysicist Jack Greer and his team of scientists who believe they may have found the asteroid that killed off the Dinosaurs. They are drilling off the Yucatán coast, with the hope of getting a sample, when they suddenly drill into something that will change everything!

Meanwhile, geneticist Dr. Mia Ward is baffled by the strange illness that has been popping up. She receives a package from her former mentor Alan Salzburg that contains clues to what this illness could be. But someone doesn’t want her decoding the information and she is attacked. With the help of a friend she escapes but is on the run trying to find the answers before it’s too late. When these two finally come together, it’s with some shocking thoughts about life on earth.

This book was awesome!! It almost feels like two separate stories for the most part, which I actually really liked. Jack’s side of the story was fascinating and I thoroughly enjoyed every aspect of it. The idea of searching for the asteroid was enough for me, but when they find the thing in the water, it was thrilling. Following them into the ship kept me on the edge of my seat. When you think you have things figured out, well the author just throws something else into the mix that makes you think.

In all, this was a thrilling read. Once I started, I had a hard time stopping because there was always something happening and I needed to see what happened next. I am so looking forward to book 2 of this as it did end on a bit of a cliffhanger.

Gary Tiedemann read this well. His tones and cadences brought this to life and he easily kept my attention throughout. He gave each character their own voice, which made following the book a lot easier. I’ve listened to a good few that he has narrated and have enjoyed his performance each time.

I was given this free audiobook at my request and have voluntarily left this review. This in no way affected nor influenced my thoughts.

We were wrong about the origins of our species.

For eons, the truth has remained hidden.

Geophysicist Jack Greer believes he may finally have found the resting place of the meteorite that wiped out the dinosaurs sixty-five million years ago. A few miles off the Yucatán coast, Jack and a team of scientists tow an aging drilling platform over the impact crater with the aim of securing a sample. But buried deep beneath the earth lies a shocking discovery that threatens to shatter everything we think we know about the origins of our species.

A world away, geneticist Dr. Mia Ward receives a mysterious delivery from her former boss and mentor, Alan Salzburg. In it are clues of a dire warning hidden inside the human genome, one which foretells man’s very extinction.

His instructions to Mia are simple: keep the information safe and, above all, trust no one–words all the more chilling after Alan turns up dead. But who wrote the message and what does it mean? Jack’s recent discovery just may hold the answers, but can she reach him in time to save the human race?