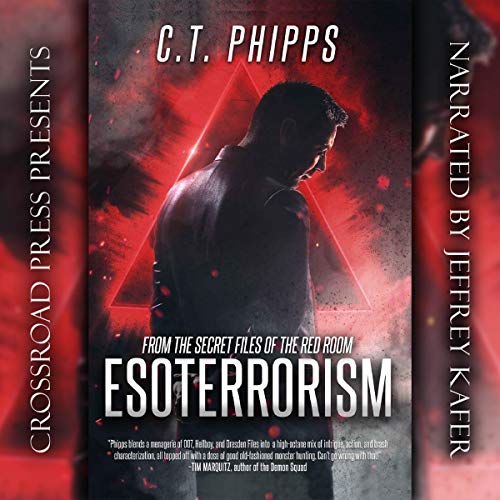 As I mentioned in my last review – I’m starting to become a bit of a Phipps fan-boy and I’m not ashamed of that.  He’s able to write these fantasy stories that I want to read.  Stories that have wonderful characters and character-building that are set in these completely believable worlds.

From what I understand, Esoterrorism takes place in the same world as the Bright Falls and Straight Outta Fangton but before those stories take place.  It felt like that and it had that familiarity but it was also something new and exciting.  The Red Room is an anti-monster version of a couple versions of the US’s three-letter departments (or even more so, the ones that you don’t hear of). They are there to protect the world from monsters – but also there to cover up any evidence of their existence.

Derek as a character was pretty close to perfect.  He’s obviously flawed (if you’ve never read a Phipps story this is a cornerstone of them all) but also, in the end, he’s a good guy who is trying to make the world a better place.  He has his issues and he’s trying to work through them (sometimes through comedy which is always great to me).

In Esoterrorism he’s thrown into a conspiracy and an issue bigger than he expected. He, along with his new partner, is trying to find a mole from within their organization.  If I go any more into the story, who they talk to, or what the end up finding it would contain obvious spoilers but know you’re in for some old-school mystery hunting mixed with some James Bond thrown in a blender with some awesome/interesting monsters, legends, and fantasy beings.

Esoterrorism flew by and I finished it in only a couple of days.  Phipps writes these complete stories in an overarching world that are perfect bite-sized bits.  He completes the stories arc but also leaves it open to have more happen in the world.  How he’s able to keep his multiple series apart amazes and impresses me.

Overall, Esoterrorism was a fantastic read that I loved.  Much like other Phipps’ works with some uniqueness as well.  If you’re a fan of his work, you’ll obviously love this.

There are no good guys in the world of shadows...but maybe some bad men are better than others.

Derek Hawthorne was born to be an agent of the Red Room. Literally. Raised in a conspiracy which has protected the world from the supernatural for centuries, he's never been anything other than a servant of their agenda. Times are changing, though, and it may not be long before their existence is exposed.

When a routine mission uncovers the latest plan of the magical terrorist, the Wazir, Derek finds himself saddled with a new partner. Who is the mysterious but deadly Shannon O'Reilly? What is her agenda? Couple this with the discovery the Red Room has a mole seeking to frame Derek for treason, and you have a plot which might bring down a millennium-old organization.

Can he stop the Wazir's mission to expose the supernatural? And should he?