A Literary Prose of a Book

I wanted to like this book, I really did.  The story itself and the description really sucked me in. I love a good apocalyptic world. I don’t even mind a little pre-apocalyptic world building but this was missing both of those.  I wouldn’t have grabbed the book had it not described a pretty cool sounding post-apocalyptic world.  But I think there is more world-building in the synopsis than there is in the actual book.

The End We Start From tells the story of London post-flood.  There isn’t much given about what caused the flood and honestly, you can’t even tell that there is a flood (the main character speaks around it a lot but never actually says “the city is flooded”.  She has given birth to a child whom she named Z (we are told the full name once) and she must raise the child in this new world.

I don’t know if it worked on paper and didn’t in audio but the fact that no one had a real name bugged the heck out of me.  Everyone had a letter for a name.  So it was nearly impossible to figure out or even remember what someone’s sex was.  I don’t know if that was done on purpose or not.  I just finished this book and I can’t remember if Z was a boy or a girl – or if it was ever even mentioned.

Second, the book was beautifully written. I believe that this is borderline poetry and definitely a literary fiction piece.  Apparently, I don’t like this writing style as much as I expected.  It was one of those really interesting types of book that you could pull a ton of neat quotes from but didn’t work at the moment.  The new mom would spout these randomly beautiful sayings out and then just talk about how Z was sucking her breasts dry. Such a weird and hard to describe dichotomy.

Overall, I can see how people would like this The End We Start From, but sadly I was not one of them.  It was an interesting storyline and could have been done in such a unique and interesting way but it fell pretty short for me.

As London is submerged below flood waters, a woman gives birth to her first child, Z. Days later, she and her baby are forced to leave their home in search of safety. They head north through a newly dangerous country seeking refuge from place to place, shelter to shelter, to a desolate island and back again. The story traces fear and wonder, as the baby's small fists grasp at the first colors he sees, as he grows and stretches, thriving and content against all the odds.

Written with poise and poeticism, The End We Start From is an indelible and elemental first book - a lyrical vision of the strangeness and beauty of new motherhood, and a portentous tale of endurance in the face of ungovernable change. 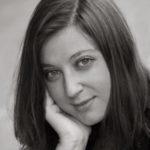 Megan Hunter was born in Manchester in 1984, and now lives in Cambridge with her young family. She has a BA in English Literature from Sussex University, and an MPhil in English Literature: Criticism and Culture from Jesus College, Cambridge. Her poetry has been shortlisted for the Bridport Prize and she was a finalist for the Aesthetica Creative Writing Award with her short story ‘Selfing’.