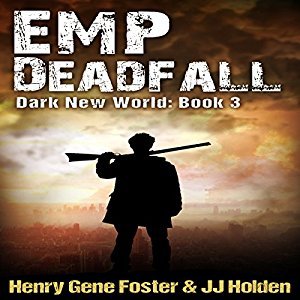 The continued story of Cassy and “the clan”

Continuing the story of Cassy and her clan, EMP Deadfall takes place at the oasis that was Cassy’s prepper compound.  Unfortunately, there are still people out there who want to see her and everyone that she’s helped dead.

EMP Deadfall was narrated by Kevin Pierce who has narrated the rest of the series.  He does a perfect job, as always with this.  The production quality and storytelling by Pierce made this story even better than it already was.

There was nothing wrong with book 3, it had a lot of great story in it and even more action, but it really feels like it is being drawn out now.  I know that trilogies are the new thing and writing at least three books is becoming the norm. But not all stories need three books to tell.  Like I said, I still enjoyed this book a lot.

Cassy has grown on me with each book, and she has really has proven to be a great leader for the clan.  Her character has easily had one of the longest arc’s in the whole series.  She’s grown, changed, and learned throughout each one.  Each book leaving her a slightly different person and character.  It’s really awesome that Foster and Holden can write such a dynamic character that is able to adapt and grow like that.

Overall, EMP Deadfall had a lot of elements I really enjoyed, and a few things that felt like they were re-used from the other books.  The re-use and extended shelf-life of this book only knock it down .5 in my rating because I still really enjoyed it!

Cassy and her clan have made it alive to the promised oasis of her farm and prepare for the upcoming winter. But old enemies race to catch up to them and have a different plan in mind.

Meanwhile, resistance cells in New York face long odds, including betrayal from within and a tightening gauntlet from the invaders and their quislings. The 20s hint at a plot to level the playing field against the invaders, but their end-game is unclear.

Will Ethan - the hacker known as Dark Ryder - uncover the truth in time, and if so will it make a difference? For the clan, the resistance, and Dark Ryder alike, a deadly trap awaits....