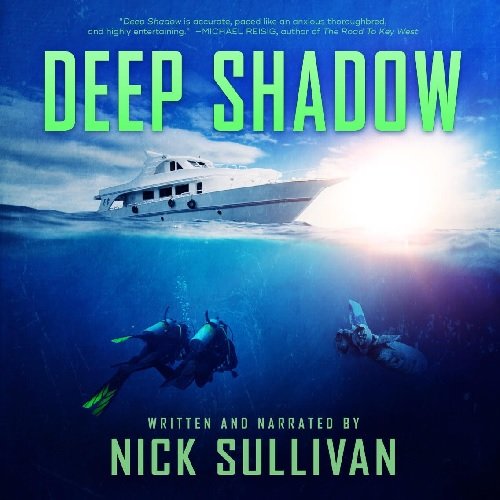 Deep Shadow has it all – Suspense, Thriller, Terrorists, and even a little spark of love? If you’re not familiar with Sullivan’s work as a fiction author – that’s because you missed one of the most enjoyable books I read in the last few years – Zombie Bigfoot.  But, you might know Sullivan because he’s been an audiobook narrator for hundreds of titles in a ton of genres.

A tale about a SCUBA instructor and divemaster who sees something that he shouldn’t have – and is taken for a ride into the deep and dark world of narco subs and a terrorist plot?

First and foremost – you can tell that this is a love-letter to the Caribbean. Sullivan is obviously a fan (which he does state at the end of the book) of the culture, climate, and diving in the Caribbean.  I can also tell that a ton of research (and non-fiction elements) went into Deep Shadow.  The way he described each island and each dive that they made is painted in this amazing color that I felt like I was there.  I’ve only ever been to Jamaica and I’ve never SCUBA’d before (outside of once in the high school pool).  But I felt like I was on these dives with the characters.  Sullivan’s expertise allowed me to live it instead of just feel like I was watching it from ashore.

The narco sub that he talks about that plays a major role in the entire novel – weaving itself in and out – hiding in the shadows is based on a real sub – he mentions this at the end of the book too, but I remember hearing about a narco sub that was found in the rivers of South American a couple years ago and I thought that was the craziest thing. I love when an author can weave non-fiction elements (adding to them as they please) with fiction. It makes the story even more believable.

The best part about Deep Shadow is that everything felt incredibly plausible.  So much so that I felt like we should be watching out for terrorist plots similar to what Sullivan wrote about.  It felt that real.  The characters were likable and easy to root for (especially Boone) – you just wanted them to do well and to come out on top.

Overall, Deep Shadow will probably be up there with my Best of 2018 books.  I can say this – I hope that Sullivan has more books in this series planned – and I hope that they are all as good as Deep Shadow was.  Nick, go back to one of these islands and get inspired for another novel!

In the turquoise waters of the Caribbean, something lethal is on the move.

Scuba divers travel from all over the world to visit the little island of Bonaire, with its crystal-clear waters and a host of beautiful marine life. After three years in the “Diver's Paradise”, divemaster Boone Fischer thought he’d seen it all; but on a routine afternoon dive, he spots something that will turn his tranquil life upside down.

From the arid shores of the ABC Islands to the tropical jungles of Venezuela—from the ocean depths of the Southern Caribbean, to the lush islands of the Northern Leewards, Deep Shadow takes Boone and the reader on an action-packed adventure filled with danger and suspense.