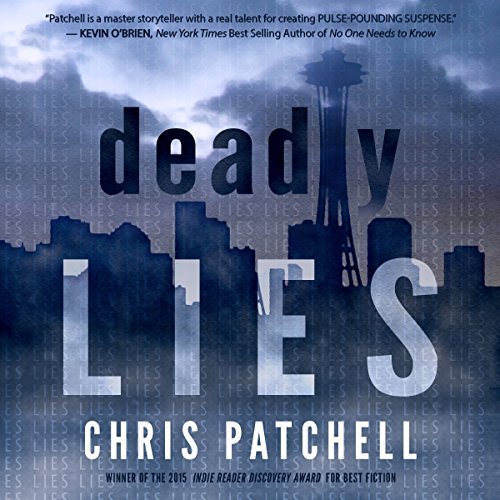 Not The Book I Expected, But Okay

The Publisher’s synopsis really drew me in here–I’m a huge fan of thrillers and mysteries and loved both the book  (The Girl with the Dragon Tattoo) and the movie (Mr. and Mrs. Smith) that Deadly Lies had been compared to. While I didn’t find this book to be quite as gripping as they had suggested it would be, I didn’t hate it. I found it a bit predictable at times and exciting at others. While I had been intrigued to read a book centered upon the lives of a husband and wife duo, where one spouse is a Detective and the other is seeking vengeance, I didn’t expect the degree of separation I encountered between the two characters or their stories.

Patchell expertly develops two strong main characters with distinct personalities and sprinkles in a supporting cast of coworkers, family members, victims, and villains. A dichotomy of sorts is established from the very beginning, as the book essentially tells two separate stories that sporadically intersect, much like the lives of our two main characters, Alex and Jill. This decision, reinforced by the use of dual narration, emphasizes the couples’ strained relationship and aids in the weaving of Jill’s dramatic ever-growing web of secrets.

During the first half of the book, we learn about Jill’s childhood traumas and find her husband, Detective Alex Shannon, investigating the disappearance of a teenager (who happens to be the sister of his former significant other) while Jill travels for business and finds herself in some hot water. Her need for revenge surfaces after an unfortunate encounter (no spoilers here) and continues for the remainder of the story, intersecting with Alex’s investigation only by chance, when a colleague asks for his assistance with another case.

If you’re looking for full disclosure, my frustration comes primarily from how much I really struggled with Jill’s character and a bit with how quickly the book was “wrapped up” at the end. While initially, I was sympathetic to Jill’s childhood traumas and her “always working husband, I didn’t find her character particularly likable for the duration of the story–she shared responsibility for her shaky marriage, made a series of poor decisions, especially for an educated, intelligent, successful woman, was short and snippy with well-meaning relatives, and overall a bit disappointing. Some of the hot water she found herself in would have been avoidable if her ethics were stronger, while some were unavoidable, resulting from the actions of those around her. I really wanted to like her–I wanted to root for her and her marriage, especially when she fell victim to the reporter (I won’t tell you how here) and began planning for some good old-fashioned vigilante justice. There was just something about her that made her hard to like…

The book’s conclusion was interesting–I felt like it was a bit rushed and would have appreciated a bit more but I also think Patchell carefully balanced the reader’s need for closure with his need to leave them intrigued enough to pick up book number two. Overall, Deadly Lies wasn’t as suspenseful and thrilling as I had hoped it would be but it was a good story with interesting characters and amazing narrators. It left me thinking I might give the second book a shot, especially if Cauldwell and Stillwell return to read it to me.

As a teenager, Jill Shannon fell victim to her stepfather's cruel abuse. Now, as an adult, Jill's made it - she has a successful career and a solid, if not static, marriage to Detective Alex Shannon. Together they live out what seems to be a perfect life in Seattle.

The vow she made as a teenager to never again be a victim lies dormant - until one day a reporter lures her to his hotel room under the pretense of an interview - and suddenly it all comes rushing back.

Jill seeks revenge on the reporter, triggering a series of events that leads Jill down a wormhole of retribution, forcing her to spin an ever-widening web of lies.

Meanwhile, Alex is on the case of a series of murders that began as cyber relationships. There seems to be a familiar fingerprint on these crimes, but Alex refuses to believe that the murderer could be so close to him.

For those who couldn't put down The Girl with the Dragon Tattoo comes a thrilling ride a la Mr. and Mrs. Smith, where husband and wife stand on opposite sides of a divide created by lies and rooted in a dark and deadly past.

Also by this author: In The Dark

Audiobook: In the Dark by Chris Patchell